Porchetta Follow Up is a Go; Lit Seeking to Change Identity 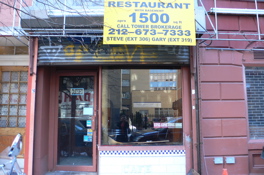 Last night, Community Board 3 gathered for a marathon six-hour meeting, doling out verdicts on liquor licenses for dozens of East Village and Lower East Side bars and restaurants. Here’s how it all went down:

1) After nearly five-and-a-half hours, Porchetta chef Sara Jenkins went before the board seeking approval for a new Italian restaurant. The board unanimously approved a beer and wine license for the two-room, 74-seat space. With a license squared away, Jenkins will now work on finishing up negotiations on the space, located at 21-23 East Seventh Street, but she said she could end up elsewhere because “there are a lot of spaces out there and it’s a buyer’s market.” If everything works out, Jenkins is aiming for a late summer opening.

2) The pitchforks and community outcries came out during a request for a license transfer from the East Village’s Lit Lounge to a proposed new venture from the same owners. One would think they would be happy that the bar is changing things up, but several community members brought signs and spoke out against the owners of Lit, complaining about crowds on the sidewalk forcing pedestrians to walk in the street and music that plays past 4 a.m. on weekends. “You run an unbelievably irresponsible business,” said one community member. Nearly every speaker invoked the same phrase: “Lit is not a good neighbor.”

After expressing surprise at the turnout against the lounge, one of the committee members told the owners, “If you’re surprised about this type of outcry, then you are clearly not running your business well.” The owners agreed to withdraw their transfer request and demonstrate in the following month that they are willing to make changes, including lowering the volume of music and less crowding on the sidewalk outside the bar.

3) After last month’s shutter snafu forced Professor Thom’s to close for three weeks and cancel its Lost viewing party, the owners appeared before the board to get an extension on their liquor license. The owners responded to questions following several complaints from neighbors about noise and loitering. After reassuring the board that measures had been taken like adding a manager to the second-floor of the bar to control rowdy crowds, the board extended the bar’s license.

4) Of course, no community board meeting would be complete without rejected applicants. TPoutine, which serves up Canada’s signature dish on Ludlow Street, was denied a liquor license due to a lack of signatures from local neighbors and a history of noise complaints. The board suggested the owners tweak the sound system.

5) The owners of the Asian-Italian fusion joint Asia Roma came before the board and were approved for their space, located at 40 Mott St.

6) Mario’s Pizza, which opened in the Chickpea space on Houston Street a couple of months ago, was approved for a beer-and-wine license. Despite complaints from neighbors of an over-saturated Alphabet City, a license transfer was granted for a new unnamed bar coming to 225 Avenue B, in the former Uncle Ming’s space. And, finally, Zucco: Le French Diner on Orchard Street was granted an extension of its license to it for its sidewalk café, which consists of just one table and four chairs.
—Thomas Garry
· Previous Community Board Coverage [~ENY~]