One of the Last Dives, Blarney Cove on Far East 14th St.

Share All sharing options for: One of the Last Dives, Blarney Cove on Far East 14th St. 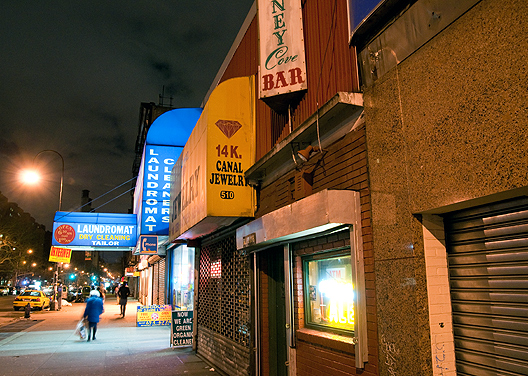 Blarney Cove, a hard-drinker's retreat on a dark stretch of East 14th Street beyond Avenue A, has the right name. It is a cove, a long narrow inlet not much wider than the roller-shutter-framed door by which you enter. The joint does, however, go back a mile, only running out of bar toward the end, where a few tables, video games and a couple restrooms are swallowed up in the circa-1970s darkness. There's one bathroom for each sex, though the night I was there, the only person who could have used the women's room was the bartender, a friendly blonde in glasses, a black top and black beret, who looked like she should be serving espressos to Kerouac at the Gaslight. The men's room has surprisingly high ceilings and an industrial sink. Somewhere along the line, the hot and cold faucet handles were replaced by screws.

The bartendress proudly calls the Blarney Cove "one of the last dives in the neighborhood," and no one at the bar seemed to object. She said she was actually a photographer by trade, and really more of a customer than a bartender. But she occasionally helped sling drinks during the holidays, and, when a position opened, she took it, it being hard times and all.

The main bartender is a former cop called Popeye, his importance signified by a framed portrait of the cartoon sailor behind the bar. Also back there are an assortment of odd cubby holes which provide homes for some of the better liquor bottles as well as a mean-looking shillaly hanging from a hook—though I think it's probably reached for as seldom as the fancy booze is. Blarney Cove's regulars may be grizzled and sozzled, scarred and unshaven, but they're a gentle and chummy crowd, perfectly willing to engage a stranger in a conversation about the Yankees' fortunes, and the miracle of an abandoned scarf that, though made of acrylic, feels just like cashmere.

Drafts number four and are what you expect: nothing more exotic than Yeungling. A lonely nod to modern culture is a framed poster of the 2009 Paul Rudd film "I Love You, Man," bolted to the wall. The beatnik bartendress doesn't know why it's there or when it arrived. No scene in the film was shot in the bar. "It does look kinda permanent, doesn't it?" she ventured. Kind of like the Blarney Cove.
—Robert Simonson