A Snapshot of Nolita Reactions to the Shake Shack Retreat

Share All sharing options for: A Snapshot of Nolita Reactions to the Shake Shack Retreat

To close out the Shack coverage for the day, Eater intern Thomas Garry canvassed the neighborhood to find the local reaction to the Shacklash news. 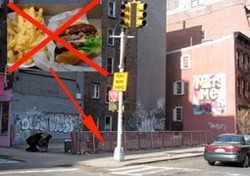 Ryan Steckowski, general manager of Delicatessen: "I'm not that surprised. The community board is tough in this neighborhood. I mean, it would've been good because it would bring more traffic over from Broadway. But I'm not sure if it would've taken away business away from us, because we do a lot of burger business...There are a handful of people in this community that aren't crazy about noise that comes from outdoor seating and restaurants in general. They just seem to want to keep it calm."

Renita Abraham, Nolita resident: "I live down the street with my husband and we thought it was a great idea. Then we started to hear about all the community opposition. We're very disappointed."

Peter Koper, member of the committee that put up the Stop Shake Shack sign: "This is amazing. Just a huge weight has been lifted off the neighborhood's shoulders...Danny Meyer is a mensch. He realized that this is the wrong place for it. There is no park or any benches around here. They said they wanted to serve 100 people an hour. Where were they going to go?...

...The proposed rooftop terrace was so close to these building that you could literally reach out and grab a bottle of wine from the dining room table. The other Shake Shacks are all next to parks. This just isn't the place for one. I'll be going to Shake Shack in Madison Square Park later to celebrate."

Janet Morgan, Nolita resident: "That lot has been an eyesore for as long as I can remember. But I'd rather have that instead of lines of tourists down my street. There are plenty of other places around Soho where that can be built. Not here, not around all these historic buildings."

Lisa Smith, Nolita resident: "There aren't too many affordable places to eat lunch around here. I was really looking forward to taking people there when they visited."
· Too Little Too Late, Sad Neighbors Rally for Shake Shack [~ENY~]
· Neighbors Successful in Running Shake Shack Out of Nolita [~ENY~]

Woula Coulda Shoulda Been a Shack