Just a week after Kingswood sustained damage from a fire at a paper store next door, another restaurant suffers a winter disaster. A Williamsburg tipster filed the following report at 10:45 last night after walking by a scene at year old restaurant The Brooklyn Star:

I can't get near enough to the restaurant to see if it looks burned out, but the fact that there are no fewer than 10 fire engines outside, it doesn't look good. Not verified, but the guy at the bodega next door heard oven fire, and there was certainly a forlorn looking busboy hanging around at the bodega. Lots of firefighters on the roof, too.

According to the twitters, they did have to cut a hole in the roof. We have yet to reach someone at the restaurant for a status report, but the good news is the place wasn't a pile of rubble when the tipster returned a few hours later:

"I walked by the place after the legions of emergency vehicles left and: it looked pretty normal, except for the fact that there was a very serious-looking staff meeting going on at 1:00 in the morning on a weekday". A photo of the firefighters in action, from Loaded Questions.
Update: Joaquin Baca, chef/owner of The Brooklyn Star, tells Eater that it will be a few months before his year-old restaurant will be able to "recoup and reopen" after last night's fire. workers are on the scene now clearing out broken windows from the building and debris from the kitchen. Thankfully, no one was hurt. 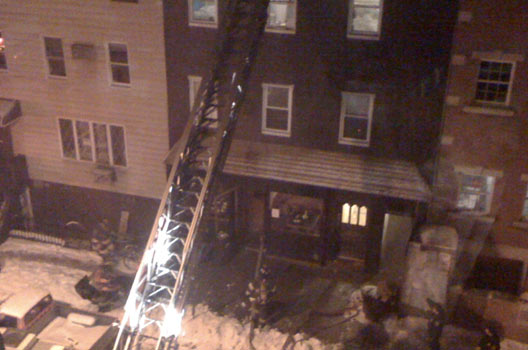