Share All sharing options for: 1 or 8 is the Most Important Restaurant to Open in the 'Burg

When Williamsburg's 1 or 8 opened last week, it was unclear if it was a clunker or a potential game changer. Add in the what looks to be crazy shilling and a rave from the Brooklyn Paper, and we're even more confused. Eater contributor and Williamsburg resident Paul Caine has volunteered to set everyone straight. 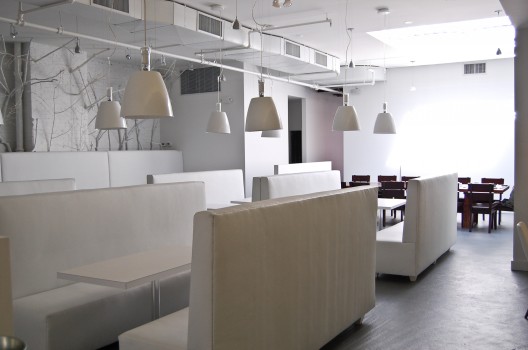 As of this writing, there is no restaurant in Williamsburg that’s stranger than 1 or 8, the new Japanese place mentioned here a couple of weeks ago. I know, because I have been there twice. It is weird. The space is huge—much bigger than the pictures make it out to be—and the walls and furniture are white as can be. The chef, apparently a Jewel Bako alum serves sushi and Japanese fusion items, and the menu gets a little molecular here and there. It might fail: I don’t know how the restaurant plans to fill its vast, not-conveniently-located space every night. But it’s the most important restaurant to open in the area, because it so fully approaches Williamsburg as a utopia—as opposed to an actual neighborhood filled with people who sometimes eat out.

Neither of Williamsburg’s prevailing restaurant ethos show up here. It’s not an established old-timer, nor does it seek to be. 1 or 8 is also not a purveyor of “New Brooklyn Cuisine.” All of the big local openings in the past few years—Dressler, Walter Foods, Rye, Five Leaves, even Motorino—fall squarely in that category. 1 or 8 takes a different tack: It’s unapologetically not local. (Check out the restaurant’s blog, which highlights its selection of fish flown in from Japan.)

1 or 8 is, however, very Japanese. It calls itself an “atelier of food,” which is the kind of pretentious, endearing, and meaningless slogan you might find at some unmarked Tokyo hotspot. The menu is laden with terrines. The maitre d’, dressed nattily in a blazer and Bapes, does his best to ignore you unless you spring for the 10-course whatever. I went two nights in a row, and the second time I went in, my party was the only one there. The maitre d’ glanced at us, but only from afar. My waitress, whom I’d had the previous night, didn’t recognize me. And yet, the place has its charms. After my first meal, I’d thought about becoming a regular. I could see myself luxuriating in the weird white fluorescence most nights, sipping sake and having the chef send a little morsel over from time to time.

At the same time, I fear that Frank Bruni’s ageless declaration might hold true. (And I hope it isn’t.) “This restaurant isn’t in the hospitality business,” he wrote, in reference to a now-forgotten failure. “It’s in the attitude business, projecting an aloofness that permeated all of my meals there.” 1 or 8 seems tailored to cartoon Williamsburg inhabitants, the ones who live in design magazines. But the most popular restaurants in the area are places like Motorino and Five Leaves, which serve well-priced food without much fuss, and they’re the places that do the best job of mirroring the neighborhood’s population.

Even so, my monkfish liver was delicious, and not too expensive at $12. It came nestled in a tomato gelee and garnished with dashi foam—pretty ambitious, just like the restaurant itself.
—Paul Caine