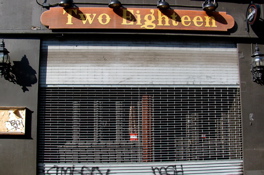 Last night, Community Board 2 met with the public, locals, and restaurant and bar owners to dole out the booze. Compared to the drama over the Shake Shack proposal, everyone had a pretty easy go of it. Final decisions won't be released until later this week, but here's how it all went down:

1) Representatives appearing on behalf of Michael White’s new restaurant described his forthcoming project at 218 Lafayette Street as an “Italian version of a truck stop.” The 94-seat eatery will have no tablecloths and no reservations, but will still focus on fine dining, with fresh pasta hand-made daily and a lot of grilled meats. The restaurant will serve breakfast, lunch, and dinner and the food will hail from the Tavoliere region, or the “breadbasket of Italy.” The restaurant’s representatives said that it was the same pasta served uptown in a more relaxed and more affordable setting.

Community members’ concerns at last night's meeting focused on making sure the space didn’t “metamorphize into a full bar scene.” The restaurant’s representatives were quick to assure that food, not drinks, remained the top priority and the restaurant would be an upgrade from the bars that had occupied the space for decades.

Addressing other concerns, stipulations were added to the liquor license that included no live music, no outdoor café seating and no extension of hours past 1 AM. Other residents expressed concern that without reservations, patrons would loiter in the new park just completed at Petrosino Square.

2) Villa Pacri, a new three-floor Italian complex in the former Merkato 55 space, had a hard time convincing residents and the board that it would be a welcome addition to the Meatpacking District. The ground floor will house a caf&eacute;, the second floor will be an upscale restaurant while the basement will be an after-dinner salon lounge. Residents took issue with the proposed hours of the venue and asked owner Pascal Ramette to change the closing time of the ground floor café from 4 a.m. to 2:30 a.m. The other main complaint was the noise a DJ in the lounge would create.

Following a string of concerned residents, four community members showed up to voice support for the venue but, like Ramette, they all had French accents, which prompted some residents to question whether they were actually from the neighborhood or were just shills.

3) The new tenant of the Cafe Bruxelles space applied to get a transfer. It will have a new menu but the same hours of operation. The owner, François Latapie, also mentioned that he wants to "fix the facade" of the restaurant.

4) Bread applied for a liquor license, finally. Same menu, shorter hours, and no increase in seating. They just want to "complement the menu so people can have a cocktail with dinner." The board has no issues with with application.

5) Housing Works Bookstore applied for a liquor license for its cafe (it currently has a beer/wine license), in order to raise the organization's $2 million/year revenue. Hours will stay the same, closing at 9 PM. The board requested the Housing Works rep to apply for a catering license instead.

6) Astor Center is expanding the amount of space allowed for its catering license, which is going to include what used to be the restaurant Serafina next door on 23 East 4th St. (It closed and Astor Center took it over.) Apart from holding wine classes, the space will be offered to be rented out. The board seemed to have no issue with the request.