Share All sharing options for: 10 Famous NYC Restaurant Names Found Outside of NYC

[Clockwise from left: The Shake Shack in Charlotte, NC; Red Rooster in Chicago; Babbo in Arizona; Lincoln in Chicago]

New York is full of notable restaurants with iconic names. But, if you take a look outside of the city, you’ll see that many of these famous titles are also atop the menus, storefronts and business cards of other eateries in towns and cities across the country. Most of these establishments share nothing in common with their NYC counterparts, but, oddly enough, a few are almost exactly identical. Let’s meet them, shall we? 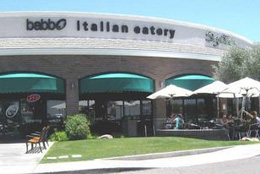 10) Babbo: Mario Batali’s Babbo is consistently praised as one of the greatest restaurants in New York City. But the one in Arizona doesn’t look too bad, either. Their extensive menu features pizzas, pastas, calzones, salads, and a curious Asian-Italian fusion app called “Firecracker Rolls.” Babbo has four Phoneix-area locations to serve you, save time and order online. [photo] 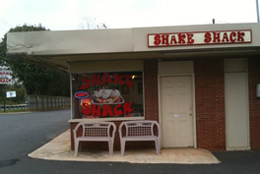 9) The Shake Shack: Can you believe it? A Shake Shack without a line? This charming little operation in Charlotte, NC will never have throngs of burger-fanatics queuing up outside, because they don’t even serve burgers. Just shakes, cones, sundaes, cookies — that kind of stuff. [photo] 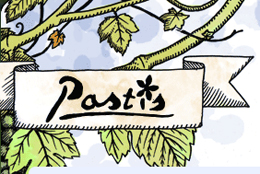 8) Pastis: Unlike the McNally mega-bistro, this Roswell, GA restaurant serves food that is “sure to satisfy the harshest critics.” Their menu is also incredibly reasonably priced. The Pastis Sampler, for example, includes small tastings of fried calamari, pate, brie cheese, and vodka-cured salmon all for only $15. [photo] 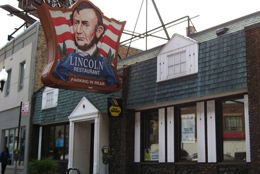 7) Lincoln: At this relic in Chicago’s North Center, you won’t find anything remotely resembling the meticulously crafted Northern Italian cuisine served at Jonathan Benno’s pricey new UWS restaurant of the same name. But, they do have spaghetti with meatballs on the menu, as well as breakfast skillets, soups and chowders, burgers and sandwiches. People love their big soda mugs, which one Yelp user describes as “too heavy for small women and children to lift.” And, on Monday nights, they have live banjo music. [photo] 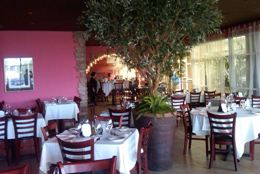 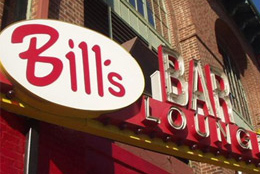 5) Bill's Bar: The signage of this bar near Fenway Park in Boston, is almost exactly identical to the one at Steve Hanson’s growing burger chain. A Yelper helps illustrate the difference between the two:“Bill’s Bar takes me back. I remember when they would play endless loops of "Land Down Under" by Men at Work and show "Riding Bean" on the tv screens between band sets.?? It's a great place to go if Jillian's gets on your nerves and you are just not feeling the Avalonplex or the Game On! plex.”[photo] 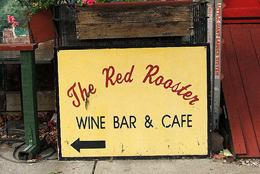 4) Red Rooster: Everyone’s wondering when Marcus Samuelsson’s Harlem restaurant/bar/performance space is going to open, but in Chicago they’ve had a Red Rooster for almost ten years now! And actually, this French bistro seems to have already achieved what Samuelsson’s going for: it’s a casual, much-beloved neighborhood joint with a bustling bar and moderately priced food.
[photo] 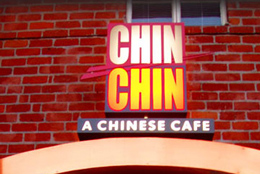 3) Chin Chin: The weirdest thing about this breezy LA-based mini chain — which bears no relation to the Midtown classic — is that they actually have a location inside the New York-New York Hotel and Casino in Las Vegas. Confusing! [photo] 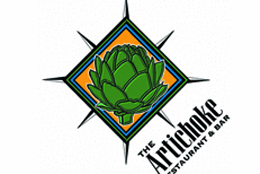 2) Artichoke: This restaurant in Langley, OK is not a pizza place, but a premium chophouse. They do, however, serve artichoke and spinach dip, as well as a “Whole Fried Potato,” which is actually the kind of thing that Francis Garcia and Sal Basille might put on the menu at their pizzerias. [photo] 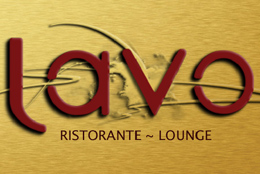 1) Lavo: As Sam Sifton noted, the flashy new Vegas import in Midtown blurs the line between restaurant and club. The one in Saugus, MA confuses things even further. It also serves brick oven pizzas and Italian fare, plus tapas-like small plates. It too has table seating and a lounge with a DJ and dancefloor. From their website: “Welcome to Lavo, where dining and nightlife meet. Throughout the dinner hour, enjoy the classic tunes of Frank Sinatra, Dean Martin, Bobby Darin and old school Motown. As the evening progresses, so do the movies, groove and attitude. The music takes over, the atmosphere transforms and the lounge vibe comes alive. So sit back and enjoy the best of both worlds." [photo]