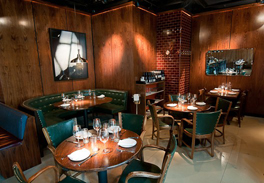 Sometimes it happens: you’re in a pub in some neighborhood like Murray Hill (let’s just forget the “why?”) where, by virtue of your surroundings, you’ve become a die-hard football fan for the evening. The bartender is leading a parade of Guinness and Stella, blue cheese dressing is spilled on the bar, and you’ve just avoided being punched in the face by yet another unexpected fist-pump. But, for some inexplicable reason, this scene has inspired a craving for wine. Your eyes meet the magnum of Woodbridge that’s been sitting behind the bar so long it’s now more Madeira than Merlot and you think—maybe—then promptly judge yourself for even considering it.

When assembling the beverage program at Soho’s new American pub, Burger & Barrel, partner John McDonald and Beverage Director Natalie Tapken vowed to create the kind of restaurant that would solve this very predicament by offering a smart selection of wines with B&B’s pub fare. Turns out they not only solved the dilemma, but they’ve managed to turn the place into a wine destination, albeit one with a bunch of hamburgers.

The full bottle list is varied, and oscillates between quirky (Malvasia from The Canary Islands) and familiar (Chardonnay from Sonoma). The markups are quite low across the board, and the list offers several fine options for those looking to lay out some cash on CA cabernet. Tapken rips a page out of Bar Henry’s book by offering every wine on the list by the half bottle, at half the price. The wines-by-the-glass program includes several wines on tap—including Donkey & Goat’s Vermentino and Syrah and several wines from Red Hook Winery—and 25 more by the traditional pour. In addition, Tapken borrows another page—this time from Bar Boulud’s book—and offers a daily glass pour from a large format bottle. It’s a great place to get a glass of wine—something that SoHo is in perpetual need of.

Yes, Burger & Barrel’s “wine pub” theme might flirt with gimmickry and its features may rely heavily on trend (Wine on tap! Magnum pours!), but B & B’s beverage program is anything but hollow. It’s well assembled, appropriate, and—perhaps more than anything else—there’s no Woodbridge in sight.

Bang For Your Buck
Muscadet ‘Granite de Clisson’ 2007. Pépière $50
Marc Ollivier’s wines are easily some of, if not the best wines out of Muscadet. The Granite de Clisson is a newer bottling for Ollivier and is sourced from vines planted on granite and spends two years on the lees. The classic Muscadet interplay of nervy acidity and leesy richness at its finest. Two parts Melon de Bourgogne one part magic.

Malvasia 2009, Bermejo $50
The Canary Islands—Spain’s archipelago off the coast of northern Africa—can trace their winemaking history back to the 15th century, but have only recently regained a presence in the international market. The island vines are planted in sci-fi craters in black volcanic ash to protect the vines from apocalyptic winds. The Malvasia is perhaps the most transparent (i.e. volcano-y) of the Bermejo wines

Morgon 2008, Lapierre $52
Lapierre is one of the most influential winemakers out of Beaujolais. He recently passed away and since then his wines—which are some of the finest in the appellation—are increasingly difficult to find. This may not be the now endangered 2009, but it’s still brimming with Marcel’s magic.

St. Emilion Grand Cru Classé 1998, Château Bellevue $60
An excellent value from the oft-overlooked Bellevue estate. Mature, respectable Bordeaux at under $75 isn’t exactly easy to find and they likely have this in limited quantities. A great find and a fine burger mate.

Valpolicella Superiore 2004, Marion $65
The Marion label was created by Celestino Gaspari, the winemaker at Quintarelli for 20 years and a consulting winemaker for Dal Forno (both of which are considered to be the two greatest estates in the Veneto). Stylistically, the wines fall somewhere in between the unbridled power of Dal Forno and the elegance of Quintarelli, with a price tag that’s far more manageable. Needless to say, they’ve enjoyed cult status since release.

Crowd Pleaser
Chardonnay 2009, Lioco $45
The new darling of the un-oaked Chardonnay craze, Lioco makes mineral-driven, delish Chard. However, as prices continually rise with demand for this guy, it’s pushing $60 on most lists around town. An excellent value here at $45.

Malbec 2009, Substance $45
Substance Winery was conceived by Jason Huntley and Jamie Brown (Waters winery), and Greg Harrington (Gramercy Cellars) as a line of affordable wines that focus on varietal correctness (non of the wines are blended) and restraint (avoiding extraction and new oak). Here the grape made famous in Argentina, planted in Washington with a nod to its French roots.

Off The Beaten Path
Sauvignon Blanc/Ribolla Gialla 2008, Matthiasson $70
Steve Matthiasson is one of Napa’s most forward-thinking winemakers. Originally a vineyard guy, Matthiasson was inspired by a recent trip to Fruili, came back to CA, found some Ribolla, and has been making two (one white and one red) wines that have quickly gained attention. Expect high acidity levels, rich fruit and plenty of mineral complexity.

Under $40
Bourgogne Blance ‘La Souer Cadette’ 2007, Domaine de la Cadette $28
Domaine de la Cadette is situated in Vézelay a little crumb of a town near Chablis that is just now beginning to revive its wine culture. This estate’s wines recall the interplay of mineral cut and richness that some of the much more expensive wines of Chablis possess. The Bourgogne is a fine introduction and an incredible value.

Break The Bank
Grüner Veltliner Smaragd ‘Zwerithaler’ 2005, Prager $85
Prager’s wines embody the tension between ripeness and acidity that is so characteristic of the wines from the Wachau. Here, big creamy GruVe with a little time in bottle and plenty of acidity to iron it out.

Rosso della Castellada 2000, La Castellada $195
It is with their barrel-aged white wines that the Bensa brothers entered the cult Fruilian elite, but their rare red wine—only 2,500 bottles are produced each year—is worth seeking out as well. A blend of Cabernet Sauvignon and Merlot that undergoes long macerations and 45 months in new French oak, the resulting wine is at odds with what one would assume from the techniques employed; the wine is low in alcohol, high-toned, earthy, and elegant.

WTF?
The CA Pinot Noir selection definitely leans toward the blow-your-head-off end of the alcohol, extraction spectrum. A few more selections from the ever-increasing faction of more restrained Pinot Noir wouldn’t be a bad idea.