Share All sharing options for: Making Headline Predictions for 2011

As is the tradition at Eater, our closeout of the year is a survey of friends, industry types, bloggers, and readers. We've already covered Best Standbys, Top Newcomers, 2010 in One Word, Best Dining Neighborhoods, Biggest Dining World Surprises, and Best Singular Meals, and Restaurant Breakups. Now, finally, headline predictions for 2011. 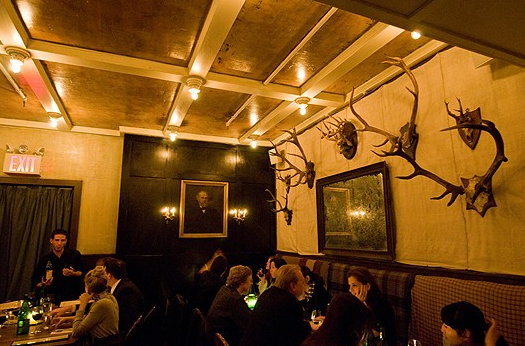 Kate Krader, restaurant editor, Food & Wine: Chicken & assorted birds (from breeds and cool poultry farmers to chef's using birds in good ways). More vegetables, especially if there's a crazy foraging story to tell about them or they're from some sort of roof top/urban garden). And cocktails - Grant Achatz! Ferran Adria!! It's going to be a good year to drink.

Marc Shepherd, NY Journal: Better. I listed a bunch of other ones on my blog, but the one-word summary is: Better.

Gabriella Gershenson, Saveur: Vegetables: They're back, for the very first time.

Michael Williams, AContinuousLean: No idea. Hopefully it will be about people finally accepting the death of restaurant taxidermy. I'll stop writing about heritage Americana if the New York restaurant scene stops with the fake farm-house-distressed-wood and antlers.

David Sax, writer, author Save The Deli: Schmaltz will find its way into menus both Jewish and goyish. Also, the return of goose.

Chris Stang & Andrew Steinthal of Immaculate Infatuation: Macaroni Grill opens on Union Square, which is now a Wal-Mart. Chipotle opens first ever restaurant inside a Wal-Mart.

Randy Goldberg, UrbanDaddy: Eataly Gets Its Own Zip Code. Batali To Run For Mayor. Honorary mention: Food Clusters Spring Up Everywhere. (Think Eataly, Villa Pacri, FoodParc, The Ace Hotel, The Plaza.) Honorary Honorary Mention: The Advent of Drinks that eat like a meal.

Please free to add your own answers to the comments.