Every once in a while we like to take a look at the rich history of a restaurant that is no longer with us. Today, a Coney Island gem, Childs. 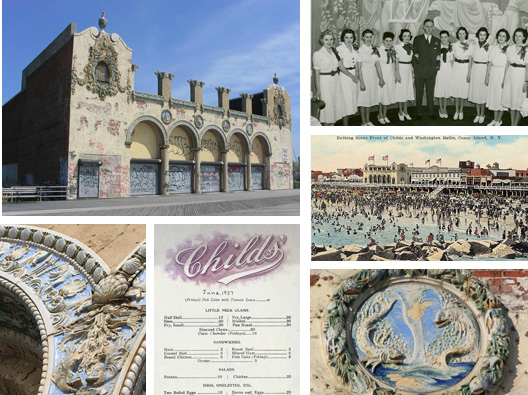 Coney Island institutions have a way of disappearing without leaving anything on the boardwalk to remember them by. That is not the case with Childs Restaurant, the seaside outpost of a popular early 20th Century lunchroom chain, that was built in 1923 and whose frame still stands today. If you've ever taken a stroll on the boardwalk, west of the parachute jump and Keyspan Park, you've probably noticed its massive facade, adorned with flamboyant nautical details. It has stuck around for so long partly because it’s kept a steady number of tenants over the years, including a chocolate factory and most recently a glitzy roller rink. The building is now completely vacant and boarded up. Here’s the story of the great restaurant that once stood there, and how the building has survived to this day.

The Childs Restaurants:
After cutting their teeth in some of the city’s most popular eateries, two brothers, Samuel and William Childs, opened their first eponymous restaurant in the FiDi at 41 Cortland Street in 1889. From that cafeteria, they’d launch a massive chain, with over 120 restaurants not just in New York, but all across the eastern seaboard and the midwest. Their Coney Island boardwalk outpost wouldn’t come until 1923, but by the time it did open, the brand was widely known and respected, especially in New York City, for serving affordable, fresh American food.

To convey cleanliness, Childs restaurants had white tile walls and floors, marble countertops, mirrors, wooden furniture and servers wearing starched white uniforms, like nurses. Many locations had a window out onto the street where a cook would flip yeast pancakes on a griddle to draw in customers. A branch in FiDi that had self-serve sandwiches is credited for inspiring the cafeteria-style, grab-and-go service that would become such a huge part of urban dining in early and middle parts of the century.

The Childs restaurant on the boardwalk was not the first for Coney Island — a small but successful location had opened in 1917 at Surf Ave and 12th street, but was demolished in 1923, when the city widened the streets. As a replacement, they built the shore-side space the same year — it was one of the biggest, and certainly the most ornate that the company had ever opened. The terra cotta façade was designed in Spanish Colonial style with off-design nautical motifs and shields, which were added to match the flavor of the boardwalk attractions just to the east. A critic for American Architect in 1924 wrote that these details were ''so lifelike that they might easily have floated in with the tide from Barren Island.'' Inside, the space was clean and open, with large, arched windows to provide diners with optimal people watching and views of the water. The building also boasted a semi-enclosed rooftop garden.

Despite its extraordinary exterior and prime location, the Childs on the boardwalk served the restaurant group's standard bill of fare: decent steaks of various sizes, eggs and omelets, sandwiches, soups and chowders, coffee and tea, and fresh baked goods and snacks to go with them. Although the food wasn’t exotic, it was fresh, simple and affordable — a wholesome counterpoint to many of the saltier dining options and attractions at the shore. A preservationist describes the vibe at the Coney Island branch in its heyday as a “hub where older people could eat, teenagers could go to get away from their parents and children could learn how to eat out.” Its success as a go-to restaurant for family vacationers lead the Childs Company to open a similarly designed location in Atlantic City in the 1930s. 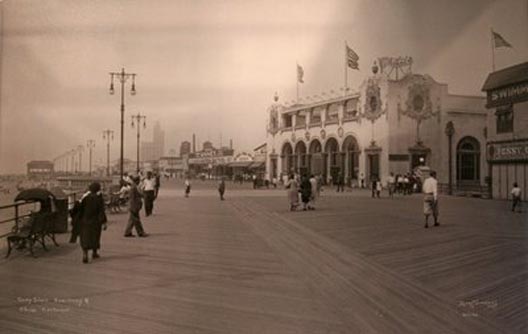 When Samuel Childs died in 1925, his brother William, a health-nut of sorts, took over the company and instituted an almost entirely vegetarian menu, which proved to be a total flop — he was ousted by the shareholders, and meat was put back on the menu in 1928. In 1932, a fire ravaged much of the boardwalk, the massive, block-long Childs building was credited for stopping the westward flow of the flames. The space was partially damaged, but reopened quickly, although the rest of the decade was not great for Coney Island or the restaurant. The onset of the depression naturally meant less vacations for New Yorkers, and many of those that could afford a holiday now had cars and made use of them on the new parkways that connected the city to more pristine resort towns like Jones Beach. The company filed for bankruptcy in 1943 and despite a small rebound, the Childs restaurant on the boardwalk was sold in 1947 to the Ricci family, who soon ceased operations and turned it into the Tell Chocolate Factory. In 1961, the Riese Organization, of T.G.I. Fridays fame, bought the entire Childs Company, and turned many locations into branches of their chain eateries. 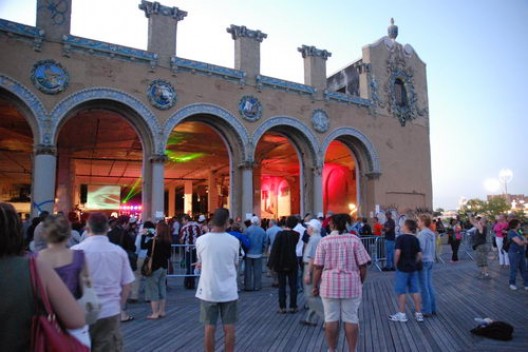 [The Lola Star years, photo via Curbed NY]
The space remained a private candy making operation for the greater part of 50 years, but the Ricci family maintained the integrity of the space, and especially its exterior, cleaning off any graffiti, and keeping the crests and nautical details in tact. Candy production inside the building dwindled down to almost nothing by the turn of the century, and the company called it quits in 2003.

In a rare victory for old Coney Island, the Landmarks Preservation Commission granted the building landmark status the same year. Since then, there have been talks of reviving the space with another restaurant or permanent attraction, but for the most part these efforts have been stalled and then dropped after getting mired in the usual Coney Island development politics. The space housed one successful redevelopment plan, though: in 2008, boardwalk entrepreneur Lola Star, reopened the Childs Building as a flashy roller rink. Earlier this year, Taconic Investments, who now own the building, did not allow Star to renew her lease in the space and the future of the Childs Building remains unknown. But for those looking for a glimpse of old Coney Island or New York's vast restaurant past, we can be thankful that it has stayed in such great shape after all these years.