Welcome to Eater's column, Decanted, in which wine whiz Talia Baiocchi guides us through the treacherous world of New York wine lists. Today: a look at the year in wine, 2010. 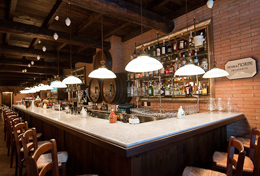 2010 may be the most significant year for wine consumption in New York in at least a half-decade.

The NYC wine-centric fine dining world’s emeritus, Cru, was finally laid to rest this year. It reopened as Lotus of Siam, a Thai restaurant with an ambitious wine list, but one that pales in comparison to Cru’s canonical ode to the pedigreed wines of Europe. And Veritas, Cru’s trusty partner in excess, is in the midst of a suspect resurrection. It’s safe to say that 2010 is the year that this genre fine dining finally slipped into a coma.

But with this end comes the ascension of a restaurant wine culture that’s far more diverse and accessible. Some of the city’s long established standard destinations are getting better as its newcomers continue to raise the bar. No borough is sacred, either; Brooklyn’s putting down its Pabst in favor of Pineau d’Aunis, the antediluvian Upper West Side crowd has never had a better reason to stay out past 6pm, and Soho—a neighborhood that has long leaned on Balthazar as its sole wine destination—received a vinous shot in the arm in 2010. In other words, wine’s consumer base is growing in every direction and restaurants seem to be responding.

So, in the spirit of the New Year, let us zigzag down memory lane as we highlight some of our favorite 2010 wine destinations, both new and old. Please do add your own faves in the comments section.

THE NEWCOMERS
Bar Henry 90 West Houston St # B, West Village
Ciano45 East 22nd Street, Flatiron
John Slover’s idea to offer more than half his wine list by the half bottle and sell the rest by the glass, made Bar Henry not only one of the most affordable places to drink wine (and great, vintage wine at that), but it inspired a trend. This year he opened Ciano with Chef Shea Gallante (formerly of Cru) and brought the concept with him, lending more real estate to Italy, but making it an equally provocative place to drink great wine at more than fair pricing.

Burger & Barrel 25 West Houston St., SoHo
B&B dresses up the pub concept with a well thought out wine list that plays off Slover by offering all of its wines by the bottle, by the half, at half price. Wines on tap abound as do big bottle pours a la Bar Boulud. The selection finds an appropriate middle ground between esoteric and homespun. [Read more: Decanted, December 7]

Anfora 34 8th Avenue, West Village
One of the most original wine lists to emerge this year. An ode to the off-the-beaten path, with each of beverage director Joe Campanale’s producers receiving their own Facebook of sorts. Despite Campanale’s penchant for the esoteric he has found a way to make his preferences accessible. It’s win for industry and neighborhood folk alike. [Read More: Decanted, December 1]

Osteria Morini 218 Lafayette Street, SoHo
Chris Cannon’s ode to Emilia Romagna and the regions around made Morini’s list a stand out in a city littered with Italian wine lists. Lambrusco gets its day in the sun and Emilia Romagna finally has a stage to show off how much progress its wines have made in the last 5 years. [Read more: Decanted, October 27]

The Tangled Vine 434 Amsterdam Avenue, Upper West Side
The Upper West Side claims one of the city’s most progressive wine bars as its very own. Ideal for Riesling and Burgundy lovers, and those with an eye for the esoteric. [Read More: Decanted, December 1]

Terroir Tribeca 24 Harrison Street, Tribeca
Paul Grieco, one of the men that turned the wine bar genre around, plants a new seed in Tribeca this year and watches it grow even faster that his first one did. More room to wiggle, same wacky wines.

OLD & NEW STANDARDS
Bar Boulud 1900 Broadway, Upper West Side
Sommelier superstar Michael Madrigale has taken Boulud’s Upper West Side outpost and turned it into a watering hole for NYC’s wine world. He pours primo wines at wholesale pricing every night and peppers his list with back vintage treasures worth traveling for. [Read more, Decanted, September 1]

Balthazar 80 Spring Street, SoHo
Though this year saw the departure of longtime McNally wine director Chris Goodhart, Balthazar remains one of the city’s best wine destinations. Its all-French wine list is still home to a grab bag of deals under $100, back vintage finds, and a trusty list of excellent wines by the glass. [Read more: Decanted, July 27]

‘inoteca cucina 98 Rivington Street, Lower East Side
’inoteca liquori 323 3rd Avenue, Murray Hill
Both ‘inoteca outposts remain two of the city’s great destinations for Italian wine lovers. The lists always house a bounty of gems on clearance and the late night crowd is rewarded with a special post 11pm list (now at both locations) that offers a selection of back vintage wines at half the price. [Read more: Decanted, April 13]

Franny’s 295 Flatbush Avenue, Park Slope
The perennial go to for Brooklynites with a thirst for something oddball, Italian, and cheap. Owner Francine Stevens plays steward to one of the city’s most endearing and progressive Italian wine lists, managing to do more than most Italian lists twice its size. [Read more: Decanted, June 22]

Gramercy Tavern 42 East 20th St, Gramercy
It’s long been a breeding ground for some of the city’s top sommelier talent (including Robert Bohr and Paul Grieco, among others), and thanks to Juliette Pope, the current wine director and a NYC legend in her own right, it remains one of best all-around lists in the city.

The Ten Bells 247 Broome Street, Lower East Side
One of the city’s great destinations, and a dead ringer for any number of Paris wine bars, has established itself as a new standard for wine industry folk and millennial wine drinkers alike. The selection of magnums is not be missed.

OFF THE BEATEN PATH
Alta 64 West 10th Street, Greenwich Village
A list of back vintage gems tucked into a sleepy West Village space that is just begging to be pillaged. It remains one of the city’s best-kept secrets. [Read more: Decanted, June 1]

Becco 355 West 46th St, Theater District
A oft-forgotten relic of Lidia’s early days, Becco still houses a list of Italian wines at firesale prices. They still maintain a full list of wines under $25 and a reserve list braving the bevy of out-of-town soccer moms fresh off a Cats matinee for.

Tribeca Grill 375 Greenwich Street, Tribeca
Another relic of days gone by, Tribeca Grill’s wine list is still helmed by industry veteran Dave Gordon. The pricing on the list's many gems has remained unchanged for a decade. In other words, it’s a treasure chest full of fancy wines at early 90s prices.

· All Previous Editions of Decanted [~ENY~]