Share All sharing options for: Experts Choose the Best Dining Neighborhood of 2010

As is the tradition at Eater, our closeout of the year is a survey of friends, industry types, bloggers, and readers. This year, we asked the group eight questions, from Meal of the Year to Top Standbys. All will be answered by the time we turn off the lights at the end of the week. Responses are related in no particular order; all are cut, pasted and unedited herein. 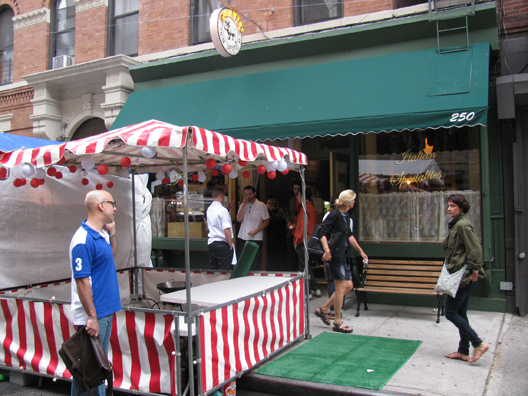 The Torrisi San Gennaro booth in Nolita, a hot dining neighborhood in 2010.

Q: What Was the Best Dining Neighborhood of 2010?

Josh Ozersky, columnist, Time Magazine: Nolita maybe: Torrisi, Morini, La Esquina under Akthar Nawab, Kenmare when it opened, Public, Balaboosta, Jo's when Colin was there, Pulino under the Nate Appleman regime, with Chinatown a block or two away.

Talia Baiocchi, wine writer: Williamsburg, Brooklyn. but only because it pisses people off when someone tries to deem williamsburg as anything more than a hipster wasteland dotted with yuppie condos.

Bret Thorn, Nation's Restaurant News: For variety and value, the East Village, but I admit that I have not spent enough time in Williamsburg to give it its due.

Ryan Patrick Sutton, Bloomberg restaurant critic: Carroll Gardens. Don't get me wrong, I love Willamsburg to death, but it's so decentralized and sprawling. Going to the 'burg is like going to Los Angeles. It's a bunch of disconnected suburbs. But Carroll Gardens I get. Smith Street and Court Street are the twin Culinary Miracle Miles of Brooklyn. There's Frankies. Buttermilk. Char No. 4. (crummy food, great whiskey). Lunetta. This year gave us the under-rated Seersucker and the somewhat over-rated (but still pretty dang good) Prime Meats. And Brooklyn Fare is just a few blocks away in Downtown Crooklyn so whenever I finish up with Ramirez's 20-courses, I just walk over to Smith and do postprandial libations at Clover. Makes for a killer date.

Kate Krader, restaurant editor, Food & Wine: Nolita. Specifically anything in the vicinity of Broadway-Lafayette subway stop, I probably want to eat there: Torrisi, Morini, Burger & Barrel, Rubirosa, Meatball Shop, Mercat, Peels (tho honestly, that might be another subway stop). And I have a lot of runner-ups:
a) Gramercy Area: Eataly, Eleven Madison, Maialino, Hill Country/Hill Country Fried Chicken, Shake Shack
b) Metropolitan Avenue, W-Burg: Commodore, Momofuku commissary, Saltie, Fette Sau (& i'm sure there's more if I knew that part of bklyn better)
c) Ace Hotel: it's got Breslin: Stumptown, John Dory & No 7 sub - you're set all day/all night. if I lump that in with Gramercy area it's like a super-hood.

Adam Roberts, Amateur Gourmet: With newbies like Pulino's, DBGB, and Peels and old standbys like Prune, the Momofukus and Grand Sichuan, I have to say the East Village.

Randy Goldberg, UrbanDaddy: You know, I was going to say Midtown, with Lambs club, Ma Peche, and Lavo all popping up. But I think it was Nolita, with newcomers like Kenmare, Osteria Morini, Torrisi, Travertine, Tacombi, Rubirosa, Balaboosta and Tartinery. And La Esquina, Café Select and Ed's Lobster Bar are still doing their thing. A lot packed into a little space.

Joshua David Stein, Eater National: As it has been for a while, I think, the Lower East Side, which in the original usage of the word, extends to 14th Street. [Thus encompassing Davey Chang's places.]

Kludt: With Torrisi, Balaboosta, and Rubirosa all on one block and Morini just two blocks away, it’s hands down Mulberry Street and environs.