FW: Rye House Screwed Me Over for New Years

Share All sharing options for: FW: Rye House Screwed Me Over for New Years 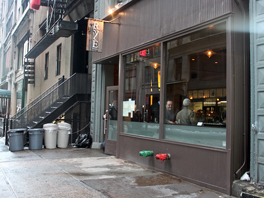 From: [an eater]
Date: Friday, December 23, 2010
To: Eater Complaints Department
Subject: Rye House Screwed me Over for New Years

On November 8, 2010, I booked a 1030pm table for 2 people through Opentable for New Years Eve at Rye House. When I received a voicemail last week (5 weeks after making the reservation) stating that they could not accommodate me, I was pretty surprised and thought that there had been some mistake. When I called back the next day, the guy on the phone told me that the owner had decided to throw a party for $150 a person and they would not accommodate regular reservations past 8pm. There were no apologies or a even a polite tone.

In the 5 weeks since I had made the reservation, I have turned town numerous party invites and watched as other restaurants have filled up, yet now I have to deal with the inconvenience of rebooking my new years eve plans. The reason for this was because Rye House chose to screw over their customers who took the time to make a booking for busiest night of the year, because it seemed like they could make more money or because they do not know how to plan properly. As bad as that is, it gets worse!

After the guy on the phone at Rye House had not made an attempt to apologize, I figured he obviously does not know how the hospitality business works, so I will prompt him. I asked if he was going to do anything to make it up to me, and his response was "I guess I could offer you a round of drinks". I told him that I don't think that covers my inconvenience and he told me he would have his owner get back to me. The owner called later that day, was just as unfriendly as the first guy, made no apologies and said he would not give me anything other than a round of drinks.

The staff at Rye House in NYC do know how hospitality works. I urge my fellow dinners to pass on this place. Food was decent on my previous visits but certainly not worth the risk of having your night ruined by ruthless and unfriendly management