A Final Beer at the Soon to Shutter Favorite, The Stoned Crow

Share All sharing options for: A Final Beer at the Soon to Shutter Favorite, The Stoned Crow 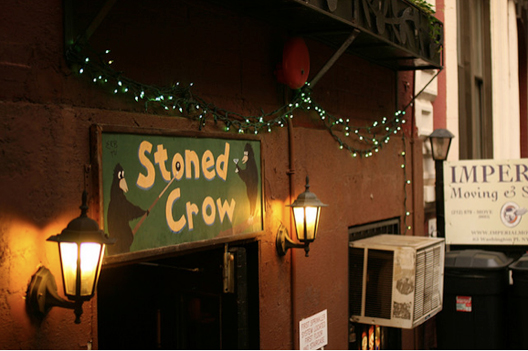 I walked into The Stoned Crow the day the news broke that the 17-year-old Greenwich Village dive would close on New Year's Eve, down the short flight of steps, through the barely marked black door, past a draft-beating curtain and into the low-ceiling cavern. The bartender set down a coaster and delivered a short speech. "Two things," he said, black hair flopping over his large, injured eyes. "The kitchen is closed. And we're cash only tonight."

No kitchen? Rats. No famous Stone Crow burger for me. I ordered a Brooklyn Lager, which tasted of ancient draft lines. So you're closing, I asked the bartender. "Yeah, unfortunately," he said and walked to the other end of the bar. But then he came back.

"You know, I done with Manhattan. I'm convinced that in ten years, Manhattan will be a gated community. You'll have to show your ID or a card to get into places. Less than one month's notice! And no job! I moved to Astoria, to the last stop of the N line to get away from it. But it's happening there. It's starting to happen. They'll just keep pushing and pushing until we're all pushed out. I'm leaving after this. If the Mars Bar can close—and that's an institution! I'm done. The guy who owns this building, he's never even seen it. Lives in China and just collects the money. The rents are controlled by the management company, and you can't talk to them. Bunch of assholes. $25,000 a month they want! Crazy! You'd have to bring in $2,000 a night to make that. We do $2,000 a night on Friday and Saturday, but that's it. It's $6 a beer. People need a place where you can drink cheap. And I feel bad about that, about $6. For a while there, I was charging $4. But someone found out and ratted me out to the boss. $4 a beer for a crowd like this." He swept his arm over the collection of six barflies that were gathered at the bar. "Who cares?"

The Stoned Crow is owned by Betty Gordon. And judging by the decor, Betty likes these things: movies of any kind, particularly Hitchcock, the posters and stills of which cover nearly every inch of wall and ceiling; caricatures of rock stars and other famous people; images of crows; and hand-drawn cartoons, particularly the ones in the back room that depict Betty as a kind of Heavy Metal Comics superhero, all hair, thighs and cleavage. Those sketches depict "Super Betty" inflicting pain on those that would disobey her multiple Commandments of Pool Playing. No drinks near the table. No smoking at the table. Don't leave cues lying on the felt. Careful with the balls.

Betty is usually to be found in the pool room, which has a high peaked roof and a skylight. There's a director's chair that bears a sign saying "Owner's Chair. Not for customers."

No surprise: the pool table is in immaculate condition.
—Robert Simonson