Welcome to Eater's column, Decanted, in which wine writer Talia Baiocchi guides us through the treacherous world of New York wine lists. Today: Seasonal and Edi & The Wolf. 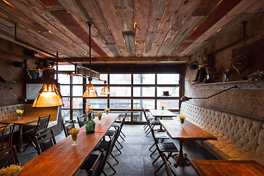 Though Austria and Germany are home to some of the greatest value wines in the world, they are the undoubtedly the most cabalistic wine countries when it comes to classification. Vineyard names are the size of sentences and there are a variety of different categorization systems that can be applied to each wine. It can be spirit crushing for someone who doesn’t live and breathe this stuff. But Wolfgang Ban, Seasonal and Edi & The Wolf’s chef, partner, and wine buyer has dedicated himself to putting together wine lists that pledge allegiance to these two countries, despite how dumbfounded diners tend to be.

His first restaurant, Seasonal, sports a solid list that pays tribute to both countries and shows a particular affection for the wines hailing from in and around his hometown of Vienna. Though Ban does clear some space for America, Italy, and France, it pays to keep your keep your attention tuned to the obscure. The list’s most esoteric specimens—the Rotgiflers, Neuburgers, and Rivaners—tend to offer the most value. But “value” is used very loosely here; the mark-ups at Seasonal are Midtown, and then some. If you’ve got about $200 to spend, there are wines that are worth visiting for, but if you’re on a budget and just looking for a wiener and some wine, save yourself $50, put $10 toward a cab, and head to Ban’s newest restaurant, Edi & the Wolf.

You’ll pay Avenue C prices at Edi (i.e. that ’03 Hirsch Gaisberg Riesling available at Seasonal for $94, will run you just $49 50 blocks south) and you’ll get an amended, more intimate, tribute to Vienna and beyond. In the coming months Ban will be adding a reserve list at Edi that will focus on back vintage Riesling and Grüner, with a smattering of wines from Italy and France. It’s already a great place to drink wine, but it has the potential to be a destination if the downtown algorithm is applied to this addition.

So while Ban does justice to both Germany and Austria with both of his lists, Seasonal’s mark-ups tend toward exclusionary. Thankfully, at Edi, his effort to dress down what Seasonal has dressed up includes a wine list full of the same Austro-German gems at far more populist pricing.

Bang For Your Buck
Furmint ‘Neusiedlersee-Hu?gelland’ 2008, Wenzel $58
In conjunction with the famous Hungarian (where this grape is primarily cultivated) winemaker Istvan Szepsy, this estate has begun to increase its production of dry Furmint. Trademark floral, nutty aromatics and waxy mouthfeel.

Riesling Spätlese ‘Zeltinger Deutschherrenberg’ 1997, CH Berres $69
The perfect example of a Riesling drinking in its zone. Off-dry, beautifully integrated and mineral-driven. Floating around town right now at several restaurants and although this mark-up is a bit higher than others, it’s still a value at this price.

Zweigelt 2007, Umathum $72
One of the better Zweigelt producers exported to the US, making classic bottlings featuring the grape. Aged in large Austrian oak and fermented with indigenous yeast, this entry level bottling is aromatic, slightly herbaceous, and juicy.

Off The Beaten Track
Neuburger ‘Hausberg’ 2007, K. Alphart $74
The Neuburger grape is the result of a spontaneous crossing of Roter Veltliner and Sylvaner (two grapes that are quite obscure on their own). The wine spends time in large, old barrels and balances considerable richness with brisk acidity.

Crowd Pleaser
Muscat 2007, Heidi Schröck $68
Heidi Schröck’s white wines are among the most popular and respected in Austria. Her Muscat is perhaps the most widely available in the States and is impossible not to like. Aromatic, sparkly fruit and plenty of minerality.

Under $40
Rivaner 2007, Moosmann $38
The only wine on the list under $40 is a Rivaner (a synonym for Muller Thurgau, a cross of Riesling and Sylvaner) from Moosman at $38. A fine crowd pleaser and a fine way to start the meal.

Riesling Smaragd ‘Ried Achleiten’ 1997, Prager $212
Prager is a superstar producer out of Austria whose wines have a long history dating back to the 1700s. They are the only producer in the Wachau that bottles more Riesling than Gruner and this bottling is evidence of exactly why that is. As with many of the ‘97s, this is still young but drinks very well at present.

Blaufränkisch Alte Reben ‘Lutzmannsburg’ 2003, Moric $198
Moric’s red wines are considered the finest out of Austria. They have stood as proof to many a critic that the reds of Austria can not only age, but they are capable of achieving world-class complexity. Unfortunately, the prices of the Moric wines reflect their singularity.

WTF?
Fatalis Fatum 2005, Wölffler $117
Though throwing a few New York wines on the list for good measure isn’t anything to look down upon, choosing one that isn’t even close to being worth the price, is. This is not only marked up too high, but there are just too many other wines on this list you can spend less on and get more. Perhaps a few affordable NY wines instead of two in the 100+ range would be a better idea.

Bang For Your Buck
Riesling ‘Gaisberg’ 2003, Hirsch $49
This is easily the lowest price on this wine in town (the same wine in on the list at Seasonal at $94). Not that long ago the distributor dumped some into the market and it’s been moonlighting on lists ever since. Great Riesling from a top producer in a tough year. In this case, it’s great value - especially at $49.

Gemischter Satz 2009, Christ $39
Rarely reputed as more than local swill, this centuries-old Austrian field blend (up to 20 varietals from the same vineyard) is in high renaissance. Clean, aromatic, and funnel-worthy.

Trilogie 2008, Wieninger $64
The entry-level red from Fritz Wieninger. Blend of Zweigelt, Merlot, and Cabernet Sauvignon made in a more open, polished style.

Crowd Pleaser
Weissburgunder ‘Vollmondwein’ 2007, Christ $49
Weissburgunder is just the Austrian name for Pinot Blanc, which is a great grape to lean on if you have a mysterious group with varying tastes. Plenty of brisk acidity, but enough fruit and roundness to make this anything but offensive.

Under $40
Zweigelt 2008 Zum Martin Sepp $ 31 (1 Liter)
One of the best thing about Austrian wines is the increasing availability of the crown top liter bottle. Many of these wines are incredibly affordable and offer serious value for a casual group that’s more about wieners than wine.

Break The Bank
Riesling Rosengartl 2008, Jutta Ambrositsch $81
Jutta Ambrositisch is an artist turned winemaker who first began making her own wine in 2002 after being urged and financially supported by famed winemaker Fritz Wieninger. Since then her annual 500 case production has gained her a cult following.

WTF?
Malbec 2008, Durigutti $42
One of these things doesn’t belong here. Surely they sell a bunch of this, but the goofy Malbec inclusions must end.