Share All sharing options for: Hot Looks from Hot Cooks: Just the Ladies

Earlier this week, we took a look at some of the cool styles that male chefs are rocking these days. And even though the guys are killing it, they still ain’t got nothing on the girls. Here’s a rundown of the hot lady looks from the hot lady cooks that are blowing minds and breaking hearts both inside and outside the kitchen right now:

This simple look — inspired by one of the most indelible images of the 20th century — is a cool way to add a little color to the standard kitchen attire, while keeping in line with DOH restrictions. The full-bandana variation is also a sly way to let your fellow cooks know that you’re a fan of the late, great David Foster Wallace.

Ditching the whites in favor of a silk pattern dress is a recipe for fun. Whether you wear your hair up or down, these little numbers always look great.

Many women chefs are taking nods from a certain Washington fashion plate — and we’re not talking about Michelle Obama here. The great thing about this look is its versatility: scarf, shawl, suit, blouse – just stick to a few solids, keep the hair parted on the side and it’s a sure-fire hit. 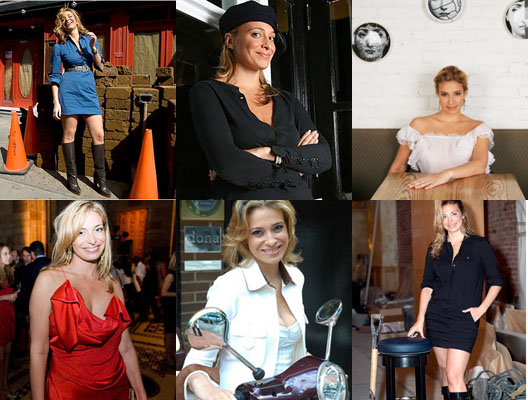 From her extensive collection of Louboutins, to her fierce suit combos, to her blinged-out pizza oven, Donatella Arpaia is always one fire in the style department. Some of our favorite looks include: Boho Bricklayer, Beat Poet, Under the Tuscan Sun, Red Carpet, Roman Holiday and Feisty Widow. Someone give this woman her own fashion magazine already!