This past weekend turned out to be one for the ages in terms of nightlife in New York. What made it so darn special? First, Jersey Shore star DJ Pauly D drew a capacity crowd to Terminal 5 for his solo performance last Friday night. And this wasn't some MTV free promotion or a chance to see the rest of the cast play a game of soccer using Snooki as the ball. They paid up to $35 just to watch him push buttons and screamed like it was the Beatles at Shea Stadium, adulation that global DJ superstars probably never receive. A truly historic low for nightlife. 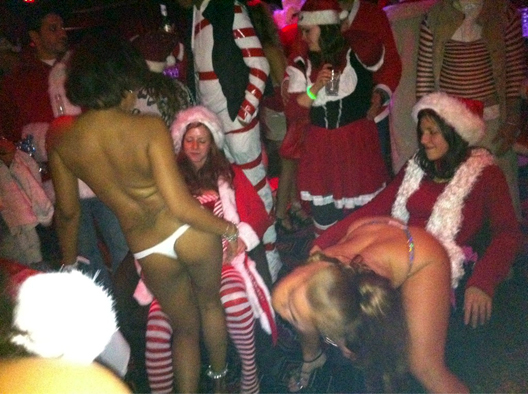 As if Pauly D's performance wasn't enough, Saturday was SantaCon, an event which gives weirdos a chance to wear velvet and drink for 12 hours while reminding longtime East Village residents exactly why they hate every new bar in the neighborhood. But SantaCon is not all about drinking and roaming downtown in packs of seven people trying to scream "Woohoo" louder than every other group. It seems some needed to explore the more sexual side of Santa Clause by getting some lap dances at a local gentleman's club while still in costume. Poor Santa. But what makes that so historic? Because along with New Year's, Halloween and St Patrick's Day, SantaCon has officially been added to the list of the Worst Nights In New York Nightlife. Congratulations!
· DJ Pauly D at Terminal 5 [Metromix]
· SantaCon Ends In Lap Dances For All! [Gothamist]
· Nightlife Coverage [~ENY~]