Share All sharing options for: The Year in Tacos, 2010

Tacos were huge in New York this year. Crispy, soft, filled with meat, kimchi, or just beans and cheese, they were the dish that kept making headlines in 2010. Here's a look back.

A Time for Tacos:

[Runaway hit Dos Toros; The Martinez Brothers win big at the 2009 Vendys]
The beginning of the city's love affair with tacos is difficult to pinpoint, but the seeds of the full-blown taco boom of 2010 were planted late last year, when a batch of new taquerias began receiving high marks from the city's top critics, and old tortilla stalwarts finally got the awards recognition they so rightly deserved. It's hard to say if the sudden popularity of the dish had anything to do with the economy, or the simple fact that New Yorkers collectively realized how damn delicious they are. But when 2010 rolled around, it was prime time for tacos.

The Taco Comes of Age:

[The Korilla Truack; Chipotle's Nate Appleman; Michael Bao's Baorrito]
The city was flooded with new taquerias this year. Some of these, like the Toloache outpost downtown, were expansions of previous hit concepts. Others, like Michael Bao’s Baorrito, were taco-turnarounds of restaurants that didn’t work. New York saw the debut of state-of-the-art taco tucks, of every shape and size, and the dish began appearing on menus at hit restaurants that don't even serve Mexican food. In one extreme example of taco-fever, hot shot chef Nate Appleman even left his cushy gig at Pulino's Bar and Pizzeria to go and sling tacos at a Chipotle in Chelsea. But perhaps the greatest expression of taco-love came from a small group of all-star chefs, including Andrew Carmellini and Wylie Dufresne, who banded together to supply their own unique takes on the dish for a charity special at Mercadito Cantina.

[Spaghetti tacos on iCarly]
In 2010, we learned that tacos don't need to be Mexican to be popular. On its first day in business, Korean taco operation The Korilla truck was completely mobbed, and the lines haven't stopped. Also, a few weeks ago, a wild rash of Italian-influenced spaghetti tacos captured the imagination of the food media. Master restaurateur Joe Bastianich was particularly vocal about his love of the strange multi-cultural creation. 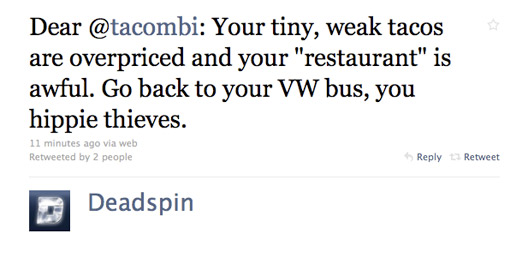 But not everyone loved tacos in 2010. After a bad experience at Nolita newcomer The Tacombi Truck, Deadspin Editor A.J. Daulerio took to the internets to voice his displeasure over their four dollar "baby fist" size take on the dish. It was the tweet heard 'round the taco-world. 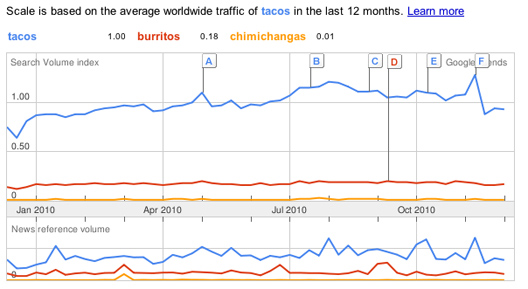 According to Google Trends, tacos were way, way more popular than burritos this year, and chimichangas didn't even chart. Maybe next year, chimis.

The Winner's Circle:
Critics loved tacos in 2010, too. Here are just are a few notable pieces of praise:

"Though each item is just a few bites, every bite is a tasty pleasure, which is what you want from any dining experience"
—Betsy Andrews on the tacos at MexiCue in the NYT

"After the first uncomfortable bite, you'll fall in love."
— The Village Voice's Robert Sietsema on the goods at Cascabel.

"Simply stick to guac, tacos and quesadillas"
— a line from Sam Sifton's one star review of Toloache in the NYT 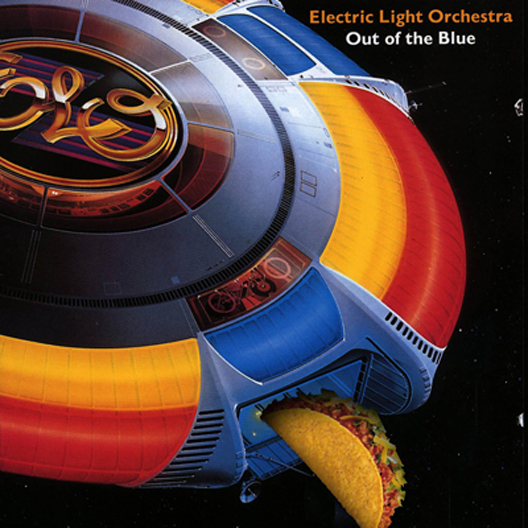 [A taco version of ELO's classic double-record Out of the Blue, from taco meme generator Album Tacos]

What does the future hold for tacos in New York? That's anyone's guess. But a number of taquerias have recently announced expansion plans, and the tremendous success of events like the NYCWFF Tacos and Tequila bash suggest that the dish's popularity won't diminish anytime soon. After all, they may be messier than burritos, but they're a lot more fun to eat.