Hell on the Outside, a Relic Within: Brooklyn's Hank's Saloon

Share All sharing options for: Hell on the Outside, a Relic Within: Brooklyn's Hank's Saloon 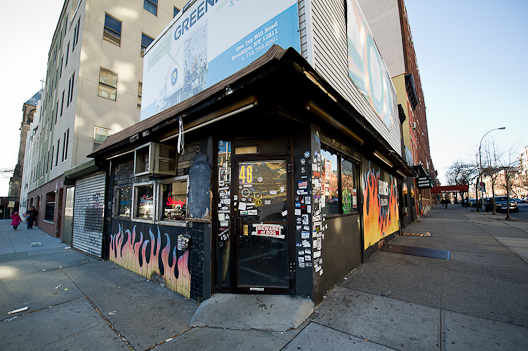 Hank's Saloon is a semi-notorious dive within the confines of its twilit half-neighborhood (Boerum Hill, technically, but this Atlantic Avenue seems to belong to everyone and no one simultaneously). The low-slung building slumps on the southwest corner of a Third Avenue intersection that it shares with a diner, a garish Walgreen's and a defunct YMCA. It's surrounded on either side by faceless, tan housing, an oasis of old school blight in a sea of modern blight.

The bar looks like hell on the outside. Literally. It's painted black, accented by large orange licks of flame. The "second floor" is an aluminum-siding-covered carbuncle that is used for who knows what, aside from something to nail billboards to. Outside, one will regularly catch glimpses of grizzled old rummies catching a smoke in the chill December air or pushing a quarter into the nearby payphone.

The inside is a different story. It tells of a century of use as a tavern. The ceiling—again painted black—is low and tin. The heavy, wooden bar was obviously once beautiful; witness the stained glass cabinets in the back. It's a battered hull now, but solid and formidable. It's also interestingly bisected by cast iron pillars that run from the ceiling straight through the bar—a feature I've seen in no other bar in New York. There's a mirror behind it, but it's almost completely obscured by a mass of stickers and signs, some advertising the bands that have played at Hank's.

Musical acts, which perform a majority of nights, take up residence in a slightly raised cubicle at the far end of the bar. (On these nights, the pool table is pushed against the wall.) Compact and boxy, it has the air of an actual proscenium stage, albeit an extremely small one. The space places the performer amongst various American flags, Bud signs and an Elvis bust, just a whiskey breath away from the drinking audience. On a recent night, the curiously young crowd was all there to see their friend, a man with a guitar and some angsty songs. Honky-Tonk women dressed in knee-high boots and men dress in flannel and wood caps put down their Old Crow and Coke to clap between songs.

It's very unlikely any in attendance understood the significance of some of the old metal signs on the south wall: Apache Beer, Pontiac Service, all decorated with the stylized images of Native Americans. Back in the 1930s and '40s, Hank's was called the Dorey Tavern and was a gathering place of the ironworking Caughnewaga population that lived in the area, then called North Gowanus. Some of the men, who helped build the Empire State Building, lived upstairs.
—Robert Simonson