Share All sharing options for: The Lambs Club Wine List Not About To Pull A Monkey Bar

Welcome to Eater's column, Decanted, in which WineChap's Talia Baiocchi guides us through the treacherous world of New York wine lists. Today: The Lambs Club. 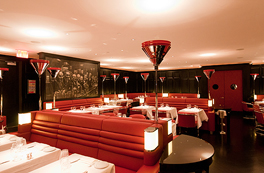 The wine list at The Lambs Club doesn’t have to try as hard as it does. It could stretch out, lie back, and be The Monkey Bar. That is to say, it could resign itself to a few pages of obvious, but inoffensive wines from around the world—throw in some La Tâche here and Petrus there for those out looking to get rid of a few grand. After all, the restaurant’s primary fan base wouldn’t be disappointed. But Beverage Director Jordan Lari—formerly of Gilt— doesn’t seem to be interested in relaxing.

As it stands, however, it isn’t among the city’s most compelling lists; it too tends to lean on the obvious, often finding itself a little disoriented as a result. But for the kind of restaurant The Lambs Club inevitably is—a restaurant that will likely be known for the actors, designers, and editors that frequent it, rather than for the merit of its food and beverage programs—it’s ambitious in context.

The list’s strength is clearly in its seasoning. Oddball trinkets—little gems from Provence and quirky Chianti (generally 2-3 a page)—and the occasional classic giveaway, pepper the list throughout. But its meat isn’t exactly grade A.

As a whole, the list struggles to find vintage depth outside of a few choice Bordeaux and domestics; the red and white Burgundy sections—where less than a handful of wines are older than five—stand out as the most juvenile. But the producers Lari chooses to represent are selected wisely and with a preference for classicism; it’s clear his comfort zone is in Burgundy.

But as the list ventures outside of France and into Spain, Italy, etc. the focus seems to waiver. The real estate granted to each country (save the United States) is quite cramped to begin with, but with Amarone from Masi and borderline-flammable Toros from Numanthia in the mix—instead of more interesting, less commercial producers—it feels downright claustrophobic.

It’s a rocky start for the list, for sure, but one that is likely to evolve into a collection that is far better than it has to be. For now, the pricing is kind by hotel restaurant standards, and if you’re willing to spend $75 or more, there are a variety of selections worth playing with. Stay tuned.

Bang For Your Buck
Jurançon Sec ‘Chant des Vignes’ 2008, Domaine Cauhapé $56
Although the main arsenal of this estate—and the Jurancon in general—is its sweet wines, Domaine Cauhapé has set out to “create a new generation of dry wines” vinified from the region’s indigenous Petit and Gros Manseng varieties. That he has. The rich, savory dry whites have been breaking the hearts of sommeliers everywhere.

Pernand-Vergelesses 2004, Domaine Rollin $86
Famed importer Neal Rosenthal considers Domaine Rollin’s wines to be the most age-worthy in his portfolio. Clean, natural winemaking and extended time in oak (although only a small percentage of that is new) yield regal wines that—like this entry-level Pernand—start to show some leg with a few years in bottle.

Pouilly-Fuissé ‘Viellies Vignes’ 2002, Château-Fuissé $75
The name begs something bulk or budget, but the wines from Château-Fuissé are excellent value wines for fans of traditional Burgundy. This ’02 is likely just opening the floodgate. Give it a dip in the decanter to speed things up.

Chianti Classico ‘Le Trame’ 2005, Le Boncie $74
This is easily one of the finest traditional Chianti Classicos on the market. Elegant, rustic Sangiovese made in small quantities that are quickly gobbled up by Italophiles in the know.

Priorat 2007, Nita $68
Priorat is a place that has become synonymous with gigantic barrel-aged red wines, but Maritxell Palleja of the tiny Nita estate is one of the few producers bottling an un-oaked red. This blend of old vine Garnacha and Cariñena acts as a charmingly rustic relief from all of the power and polish that has come to define Priorat.

Off The Beaten Track
Juhfark 2007, Kreinbacher $48
Juhfark is a Hungarian grape variety grown almost exclusive in the town of Somló, in the country’s northwest and Kreinbacher is one of the few producers bottling a 100% Juhfark that can be found in the states. Lean, mineral-driven, easy.

Crowd Pleaser
Pinot Noir ‘Hayne’s Vineyard’ 2006, Tulocay $72
Tulocay—one of the oldest and smallest estates in Napa—produces delicious under the radar Zin and Pinot Noir. The wines always exhibit a high level of restraint (i.e. very generally, they are low in alcohol and high in acid), are bottled unfiltered and tend to age quite well. Fruit-forward enough for those that don’t want to fuss with complexity, and unique enough for those looking for some quiet contemplation.

Under $40
Dry Pedro Ximenez ‘Fino en Rama’ 2004, Alvear $32 (500ml)
Here’s another, perhaps feeble, attempt to encourage people to consume sherry with the meal. Alvear is one of the top producers out of Jerez and this unfiltered fino from Montilla is a total bargain.

Break the Bank
Champagne Grand Cru Millésime 1999, Egly-Ouriet $275
One of the original artisan growers to bottle wine under his own name successfully. The 1999 is a blend of 70% Pinot Noir and 30% Chardonnay that spent 96 glorious months on its lees, resulting in a rich, yeasty wine that can easily take you through the entire meal.

Clos Milan 2004, Domaine Henri Milan $140
Natural, terroir-driven Grenache from one of Provence’s great winemakers. Lighter in color than one would expect from the habitually beefy varietal. Floral, elegant and refreshingly pure.

WTF?
Sauvignon Blanc ‘Laurel’ 2008, Viña Casa Marin $48
Why, when the list has at least 5-10 other Sauvignon Blancs on it, does Chile need to get it’s own category (there is no other Chilean wine on the list) for this sad SB? Yes, tourists and the pre-theatre crowd will probably drink something from Tijuana if it has Sauvignon Blanc on the label, but that doesn’t make this a warranted inclusion.

WineChap is a start up that seeks to foster more intelligent boozing by demystifying the culture that surrounds restaurant wine lists. Currently the site boasts more than 160 wine list reviews in New York City.
[Krieger]