Tonight is the night of the first annual Eater Awards gala. It's an invite-only affair where we'll fete the movers and shakers of the restaurant industry, and it wouldn't be complete without some Eater readers thrown in the mix. So last week we asked readers to spill their restaurant world secrets. The inbox overflowed with all kinds of shout outs for several now off the menu items—the duck for two at Eleven Madison Park, the kimchi stew at Momofuku Noodle Bar, the pork empanadas at Jo's—as well as the chicken sashimi at Tori Shin, the Ditch Dogs at Ditch Plains, and the alleged ortolan (?!) at Daniel. But below are our favorite "secrets."

Stay tuned for later today when we announce the winners of the awards, and be on the lookout for more reader tickets giveaways throughout the late morning and afternoon.

1) Wins for ingenuity and thinking on his feet: "Call me morbid, call me crazy, but dont say im not resourceful...

In an effort to assure Keith McNally's wallet stays full, I have taken one of the more circuitous routes to assuring I am always able to call up Minetta Tavern on a random Thursday and have a table for 4 that night. My secret? About 15 months ago, I scanned the obit section of the NYT and found that author Frank McCourt had passed away. A reasonably famous author and mainstay of NYC, but not one that maître d' would recognize by face, Mr. McCourt was also an avid New York diner. So when I first went to Minetta and got talking with the hostess, I told her I was having dinner with Pulitzer Prize writing author Frank McCourt. After I texted my dad, he arrived and could not have played the part better. The secret number was passed on to us at the completion of our meal with a "We look forward to serving you again Mr. McCourt." So when I want a table, I call up, say I'm Frank McCourt and go with my Dad and whoever else is willing to split the cote de boeuf. Sick? Maybe. But I always have a table and for a brief moment in time, am an "A" lister worthy of a power table for 4.

Apologies to the McCourt family and anyone who has ever had a conscience."

2) The most game changing secret for Houston's fans: "At Houston's (Hillstone), you can substitute the Spinach Dip as a side for a side that would typically come with your meal...how's that for not having to pay $14 for a bowl of oozing spinach dip?" 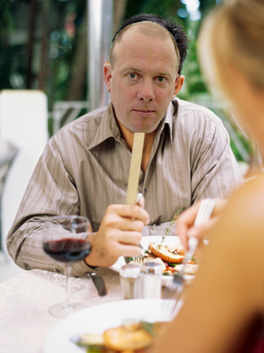 3) For cuteness: "Here's the secret to getting the best service and food at any restaurant: just wear the following mask and everything will be taken care of..."

4) Not a secret but we dig her enthusiasm: "Istria Sport Club
This is an authentic Istrian restaurant. Well, more of a Croatian Social Club, but downstairs they have a restaurant and the food is AMAZING! Located on an unassuming street in Astoria, Istria is literally a “hidden” gem. You walk into this office-like building, the social club/bar is on the first floor and is always “closed”, but there’s always a few old Croatian men hanging out drinking. Then you walk down the stairs into the basement and there’s a full restaurant with an outdoor garden where you will find mostly Croatian families hanging out. It’s the “Cheers” of Croatia where everyone knows each other. The menu is limited, changes daily and everything is served up fresh and delicious! Sometimes they even have live music, then you REALLY feel like you’re transported to Europe.

Spotted at Istria: Lidia Bastianich. Its one of her faves. You know it’s gotta be good!"

5) One reader had the secret number to get resys at speakeasy/sushi lounge Bohemian, which we won't ruin by reprinting here. Sorry.
· All Eater Awards Coverage [~ENY~]