Mandy Oser and Amorette Casaus on Why Ardesia Worked

Share All sharing options for: Mandy Oser and Amorette Casaus on Why Ardesia Worked 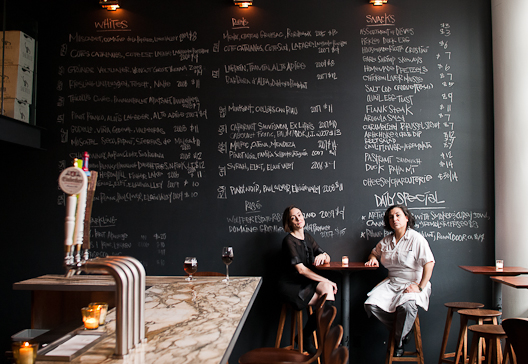 A year ago, Mandy Oser, the right hand woman of Eric Ripert at Le Bernardin, teamed up with Amorette Casaus, a small plates pro previously of El Quinto Pino, to open Ardesia in a patch of Hell’s Kitchen that was starving for good restaurants. The food, the wine, the price and the service style all clicked. We recently chatted with Mandy and Amorette about why Ardesia worked and what’s next.

Mandy Oser, restaurateur: I think people can be intimidated by wine. We love the style of dining where you can have a glass of wine, you can have a bite, or you can make more of a meal of it, and you can explore the wines and the beers so that it’s not intimidating. Why did you bring Amorette on board for this project? We met Amorette through a friend, we asked her to do a tasting and we loved what she did. She nailed exactly what we had asked of her — we didn’t talk to anyone else. Amorette Casaus, chef: I’ve been in the city cooking for ten years. El Quinto Pino was my first chef position and it was perfect for me — a small kitchen, a small staff. It really taught me how to be a manager, run specials and how to run a kitchen. Initially when I was talking to Mandy, she said that this project was going to be similar in that it was going to be small plates and a small area to work in.

How was the build? MO: At the risk of being blackballed by the Department of Buildings, I’ll say that the Department of Buildings was really challenging. That was our biggest delay. But, in the end, we opened the doors and the neighbors were really anxious for us. They were aware that something was going in. AC: They were coming in daily, and asking “When? When? When?” MO: So, that anticipation might have been a good thing, but it was certainly a challenge to have those delays that were totally out of our control.

How did the opening go? AC: People were curious and they came. Everyone from the neighborhood was very, very pleased. MO: You don’t see it, but there are tons of companies in this neighborhood — Prada, Cindy Williams, The Daily Show — so those folks have been really wonderful to us. AC: They support a huge happy hour and they stay all night too.

The menu has always been very reasonably priced. Was that a reaction to the economy at the time when you opened? MO: Yes and no. We knew that we wanted to open a place that showed good value no matter what the economy was like. Of course the economy was very scary, and we had a lot of people saying “What are you doing? You’re crazy!” But at that point, the restaurant is underway, you’ve signed the lease, and you have to go forward. So, absolutely we were reacting to that, and what people were seeking. But I think it’s a hallmark of what we wanted to offer — affordability but also good value. AC: It’s not difficult to make things inexpensive, it’s actually very easy. It’s not like we’re going out of our way to do this. MO: Every place is unique — that’s what works for our place.

Did it take time to find the team you wanted? AC: Yes, it was really hard to find the staff initially. I have a friend who’s been working in the city for ten years and she’s amazing. She’s a lifesaver and she works part time here. And then I have another cook, a young lady, who has worked in Japanese restaurants her entire cooking career, so her knife skills and precision are fantastic. It’s a female kitchen. The kitchen being so small, it’s kind of hard to have a big person in there, and women tend to be smaller. When people came to stage, there were guys who were just enormous, and it just wasn’t possible. They were nice guys and talented, but it just wasn't possible.

How has the wine list changed over the last year? MO: I think what we’ve done is increase the number of wines by the glass — we’re at 30 now. And we've given the staff the freedom to open a special bottle by the glass that is normally not sold by the glass, maybe something a little more premium, and we’re doing flights on Monday nights too. We’re just trying to play and be open to what’s new and interesting to us, but kind of like the menu, we're not going to take away those things that people love about the wine list. We want to keep it as dynamic as possible. Now we feel a little more freedom to say “Let’s open a burgundy tonight, let’s see if anyone’s interested.”

Do you feel like you’ve built the customer base you wanted? MO: I think we have, and I think we can do more. The interest for me is to go further and not rest on anything, and not be satisfied with what we’ve accomplished, but to try and do more. We want to expand outwards, we want to attract other people from other neighborhoods, and we want to create a vibrant scene for people that do love wine and do want to taste wine.