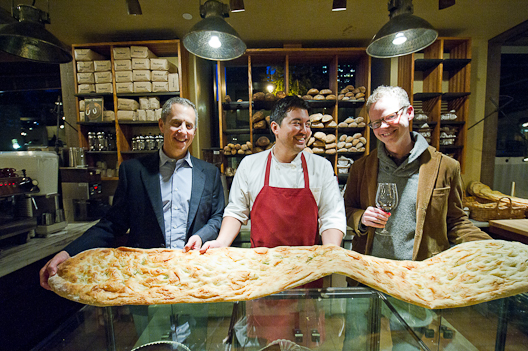 Danny Meyer visited Rome over 20 times before his 21st birthday. His father’s connections in the travel industry meant that he could grab flights to Italy for only $44 and get to know the culture of the bustling European metropolis, and especially its neighborhood trattorias, intimately. It wasn’t until the fall of 2009, after 24 years of owning and operating restaurants in New York, that Danny got to open his own version of that Italian neighborhood eatery, Maialino. The project was conceived in the early days of the recession, and according to Danny, those troubled times were part of the reason for its creation. We recently sat down with Meyer, chef Nick Anderer, and manager Terry Coughlin to chat about the first year of Maialino, and the road ahead.

Danny Meyer, restaurateur: Around the end of 2008, there were three or four months where a lot of people felt that the world had come to an end, economically. That may not sound plausible now, but I remember there were absolutely concerns that people wouldn’t go to restaurants anymore, that nobody would do?anything. This restaurant was conceived to be an antidote to all that fear. It was created based on thinking that what people needed more than ever was a hug and a place that feels like coming home. We wanted to make a place that you could come to on many, many different budgets, and we wanted to create a restaurant where the people that were overseeing your expense account would not ask “Why did you entertain at a place like that?”

How did you approach Nick and Terry about this project? DM: I’d already had the pleasure of working with Terry both at Tabla, where he was the general manager, and before that at Gramercy Tavern, where he was captain. He can build a team that makes you feel like you came home. Nick had been the executive sous chef at the Gramercy Tavern for a long time and it was very, very clear to me that he was at a point in his career where he was ready to grow. I’d known about that. What I had not known about Nick or I had conveniently forgotten about for some reason, which struck me like a lightning bolt once I first recalled it, was that Nick’s culinary dream happened to be Rome, and that Nick and I had attended the very same school in Rome, albeit 20 years apart.

What school was that? Nick Anderer, executive chef: The Rome campus at Trinity College. I did an art history program there. DM: And I had studied international politics. We had visited the same trattorias, the same bars, the same churches, the same parks — we just had this amazing collective memory. So we immediately patched together a trip to Rome and Nick spent a month there, I got to be there for almost a week of that time. Michael Romano, appropriately named for this project, joined us over there as our culinary partner, and we started eating the canon of Rome’s kitchens and finding common ground on our points of view. NA: I’ve never been more sick of spaghetti carbonara in my life.

How did those experiences in Rome factor into the design of Maialino? DM: Rome is absolutely the touch point of this restaurant. But on the other hand, something we were very conscious of was that this is not Rome — it's Gramercy Park. It would feel more authentic if we brought some New York into here, along with what we hope is a very faithful interpretation of Roman cooking on the plate.

What was that New York influence? NA: A lot of it is the Union Square market. Just being in this neighborhood and taking advantage of everything it has to offer. That extends to the people that come into the restaurant and the produce we buy. I did my best with the menu to try and make it authentically Roman, but there are certain things they cook in Rome that I can’t find here, and likewise, there are certain things in New York that you can’t find in Rome.

What were your priorities in terms of designing the service style? Terry Coughlin, manager: It was really important to find the right tone of our service here, because it needed to be comfortable, it needed to be a neighborhood restaurant. We hired people who, first and foremost were nice, good, caring people with a want and need to be a part of something special.

How was the build? DM: This was the first project that we’d ever done with David Rockwell, and he had fun being in a "restrained Rockwell moment." When you think about David’s designs, his genius through the years has been one of personal expression. But no one in the world was immune from the emotional impact of living in this recession. People were opening less restaurants and that impacted his business. I wouldn’t call this a "blue period" by any means. I think this is an exuberant restaurant, but it’s a restrained version of exuberance.

How did the opening go? NA: There was obviously a lot of hype around this restaurant, and Danny Meyer’s name is always going to attract a lot of attention. So, we certainly felt the pressure in the kitchen and the challenge for us was just to try and continue to cook like we would any day for any person. I spent a lot of hours here, obviously, and my sous chef team — who are all guys that I’ve worked with in the past — they were tremendously supportive. TC: Even in the very beginning, when there were blog posts on the first night, people would give us legitimate, honest criticism and feedback saying “Servers don’t have their menu knowledge down." Or "Some of the technical aspects are a little off.” But the one thing I kept reading over and over was “But they seem so nice, and they’re always smiling.” And that to me said that we were doing something right, because we were going to get all that other technical stuff down, it was just a matter of time and working out and growing those roots.

How was the review process? NA: I tried my best to stay offline as much as possible. I didn’t want to read anything. I didn’t want to check my e-mails — our PR director can confirm that — it was just my chef stubbornness to stick to what we were doing and not get distracted. Did anything change after the reviews came out? TC: I felt like a weight was somewhat lifted off our shoulders. Then, my focus from a front-of-the-house perspective was getting to make new friends. I’ll go out on the corner sometimes to get some fresh air, and within a half minute span I’ll see half a dozen people that live in the neighborhood that’ll come by and say “Hey Terry how’s it going?" And that was one thing where a light went off in my head, thinking “Wow, we did exactly what we said we wanted to. We created a neighborhood trattoria where you feel like this is our little piazza.”

What have been the challenges in terms of developing the menu over the last year?: DM: Because this is a part of the Gramercy Park Hotel, this became the first restaurant that we ever opened for breakfast. I think that in Rome, breakfast equals a cappuccino and a pastry, and you do see people doing that here. So, one of the challenges was to say "Okay, in Rome people just eat a pastry with a cappuccino. But what if they did eat breakfast? What would they do?" And I think that Nick and his team have come up with a brilliant answer to that, and it’s an example of the New York marriage with Rome. New Yorkers do love breakfast, and they’ve embraced this place for breakfast.

What are you looking forward to for the next year? NA: I want all of the people that have been coming to this restaurant to keep coming back. I want all of my friends in the industry, my chef friends, to come here on their days off. I told Danny my one regret when we were opening was that this is the restaurant I would want to come to on my day off, but I’d never feel comfortable here on my day off. But now I want all of my chef friends to use it in that way.
· All Maialino Coverage [~ENY~]
· All Previous Editions of One Year In [~ENY~]