Welcome to Eater's column, Decanted, in which WineChap's Talia Baiocchi guides us through the treacherous world of New York wine lists. Today: Scarpetta. 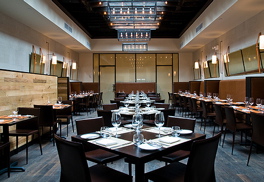 Just one year ago, Scarpetta’s wine list resembled an embryonic version of Alto’s, but it had yet to come into its own. Now, with the Scarpetta brand rabidly procreating around the world, it seems Wine Director George Hock has been given the green light to go wicked stepmother on the list.

Fatten it up he does. Over the past several months, it’s nearly doubled in size, and what was merely a wink in the direction of Italy’s underdog regions now finds Hock snuggling with them in bed. The classic wines of Barolo, Barbaresco, and Montalcino are represented, but they hardly dominate, and there are better restaurants to go to if you’re in the mood to wear out your wallet with the wines of Piedmont and Tuscany. Instead, come with the intention of digging into Italy’s regional wines—where you’ll find plenty with age in a variety of price points—or else follow the small, but intriguing bread trail that France has left across the list.

Just stay alert, as the list’s organization, though clever at times, lacks a clear path; it’s sometimes grouped by variety, other times by region, and the rest by bespoke categories and sub-categories like “Orange” under the parent category “Friuli” (which doesn’t actually cover all orange wine on the list from that region), or “Alba to Asti,” “Across the North,” “Muse: Bordeaux,” and “Muse: California.” While creative, as a whole the list tends to make things a bit more complicated than they need to be.

But let’s face it: even if Hock decided to organize the list into geometric shapes, it wouldn’t change the fact that it has come a long way, and so has Hock. He moved north from Scarpetta Miami to take over the NYC position just a year ago, and in that short time he’s managed to build an eclectic, and well-curated Italian-focused list that, despite its organization, can now count itself among the most accomplished in town.

Bang For Your Buck
Verdicchio dei Castelli di Jesi 'Tralivio' 2007, Sartarelli $42
Single-vineyard bottling from one of the greatest producers working with this variety. Medium-bodied and slightly oily with plenty of brine to clean things up. Pair with cheese or things from the sea.

Carjcanti 2007, Gulfi $53
Gukfi is making some of the more interesting, value-driven wines out of Sicily at the moment. This blend of Carricante and Albanello from Southeastern Sicily has managed the heat with ease, producing a low alcohol wine with plenty of ripeness and aromatic complexity.

Valpolicella 2009, Zy?m? $49
Secret label from Marion’s winemaker (who learned how to turn tricks from the Veneto’s two greatest producers: Dal Forno and Quintarelli). Here a rare spotting of one of his affordable wines and a prime opportunity to see what all of the hype is about without emptying your back pocket.

Etna Rosso 'Outis' 2006, Biondi $69
Sourced from volcanic soil at the foot of Mt. Etna and marinated in used barrique, this wine is one of the finest representations of Etna’s terroir to be found. A blend of native Nerello Mascalese and Nerello Capuccio and easily one of the most interesting wines on the list under $100.

Off The Beaten Path
'Barrile' 2000, Contini $67
The Contini family is one of the dustiest winemaking families in Sardinia, with experience that stretches back to the late 1800s. Hence, their knowledge of the island’s indigenous varietals is largely unparalleled. Enter: Barrile. An earthy, burly blend of Nieddera and Caddiu that sports rusticity that is unmistakably Italian.

Under $40
Brachetto 'Anthos' 2008, Matteo Correggia $39
Brachetto generally comes in sweet bubbly form, but Correggia is one of the few producers vinifying it completely still and dry. Total doilie wine—delicate, floral, and at its best with a slight chill.

Break The Bank
Palette Rouge 1986, Chateau Simone $132
It’s not everyday that you see this wine lurking around with a few decades under its belt. One of Provence’s legendary wines from the tiny appellation of Palette. Stinky upon opening, but gorgeous with a little time to shed the fuss.

Valpolicella 'Ca' del Merlo' 1994, Quintarelli $159
Guaranteed swoon from one of Italy’s most iconic artisan producers. At 16 years of age it has dropped some lbs and drinking like a sage.

Chianti Classico Riserva 1971, Castell in Villa $310
Downright iconic release from this storied Chianti estate. Impossibly rich, perfectly organized traditional Sangiovese. A small price to pay for a one of the great Chiantis made last century.

WTF?
Le Montrachet Grand Cru 2006, Remoissenet $665
Save your stash. If you’ve got an itch for Remoissenet there’s library of the domaine’s back vintage wines being pimped around town at basement pricing. You can do better at a quarter of the price on this list.

WineChap is a start up that seeks to foster more intelligent boozing by demystifying the culture that surrounds restaurant wine lists. Currently the site boasts more than 160 wine list reviews in New York City.
[Krieger]