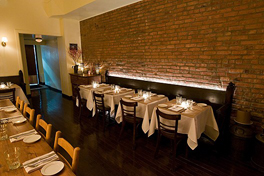 Buttermilk Channel is not a restaurant with grand ambitions. It’s a neighborhood place that favors comfort and conviviality. It has a kids’ menu and there are babies everywhere. But despite its preferences—and the unconscionable number of strollers that are cluelessly stationed in the doorway in the early evenings—its simple, Southern-inspired menu and exclusively American wine list are pleasantly hip.

However, when Buttermilk Channel first opened about 2 years ago, the wine list struggled. The quest to carry only budget-conscious American wines while remaining profitable proved to be a real challenge; the pricing was erratic and the selection was often predictable. But in the last two years owner and beverage director Doug Crowell—a FOH guy at Blue Water Grill for 10 years and a cook at both Picholine and La Grenouille before that—has managed to knock the prices down and fashion a list of domestic wines that are both interesting and affordable. The selection balances fringe producers from CA like A Donkey & Goat, Edmunds St. John, and Palmina with more familiar labels like Arcadian, Ridge, and Schramsberg. The new mark-ups allow one to spend less than $50 and walk away feeling lucky and the affordable wines by the glass rotate frequently.

It's a modest list at just over 50 selections, but it suits the restaurant perfectly and stands as fine reference point for the growing number of small, patriotic collections around town.

Bang For Your Buck
Blanc de Blancs 2006, Schramsberg $35 (375ml)
The storied Schramsberg estate—founded in Napa Valley 1862 by Jacob Schram— makes some of the finest bubbly in America. The wines are produced via méthode champenoise and aged in caves dug into the Napa hillside more than 150 years ago. Solid pricing and in a split – ideal way to start the meal off.

Arneis 2009, Palmina $38
Palmina is one of the few “Cal-Ital” producers that have found East Coast success. The arneis is consistently one of the best whites they make and remains to true to the floral aromatics and brisk acidity characteristic of the variety.

Marsanne & Roussanne ‘Coupe d’Or’ 2009, A Donkey & Goat $55
The husband and wife team behind A Donkey & Goat are darlings among a growing number of NYC buyers for their European-inspired, non-interventionist wines. They have a deft hand when it comes to Rhone white varieties. Medium-bodied, pure, aromatic.

Cabernet Franc ‘Le Breton’ 2007, Schneider $48
There’s a lot of polished Cab Franc coming out of long island, but Schneider has found a way to channel Chinon, birthing wines with a little more grit and earthiness. Easily some of the best wine coming out of LI.

Pinot Noir 2008, Belle Pente $52
Belle Pente is a small property making Oregon pinot with a distinct nod to Burgundy. The wines are generally quite affordable and offer plenty of trademark Williamette fruit and funk.

Crowd Pleaser
Abraxas 2008, Robert Sinskey $68
A nod to Alsace with a blend of Riesling, Pinot Blanc, Pinot Gris, and Gewurztraminer from one of CA’s most beloved biodynamic producers. Heady aromatics, juicy fruit, and ample acidity.

Under $40
Gamay Noir ‘Bone-Jolly’ 2008, Edmunds St. John $36
Edmunds St. John has been making wines of restraint and elegance for more than 30 years. Yet another praiseworthy effort: a snappy little gamay that will make you want to skip in circles around the table. Ask for a slight chill.

Off The Beaten Track
Colombard 2009, Yannick Rousseau $36
Colombard is California’s second-most planted white grape, but is rarely grown in high real estate areas like Napa and Sonoma. Though not the finest varietal (and generally used to make bulk wine) a few producers like Yannick Rousseau have sought to achieve more from it. Here hailing from Sonoma, the grape is fresh and high in acid - an ideal mate for some of the menu’s lighter fare.

Break The Bank
Pinot Noir ‘Antionette’ 2006, J.K. Carriere $110
JKC is among Oregon’s elite, putting out excellent wines with a definable nod toward Burgundy. This is restrained, bright PN that channels the Oregon earth with ease. The ‘Antoinette’ is a limited production bottling named for winemaker Jim Prosser’s grandmother. Less than 125 cases were produced.

Cabernet Sauvignon 2000, Corison $105
Cathy Corison’s wines are some of the most exciting in the Napa Valley. Restrained, sensible, and without the manufactured consistency that many of the Napa cabs trade their character for. She is easily one of the best—and still relatively undiscovered—producers in Napa. The ’00 has been drinking beautifully over the past year and is sold out. Get to it.

WTF?
Though the Bonny Doon wines are often interesting and an excellent value, having 5 wines from one winery on a small list is a little overkill. Shedding one or two to make room for a couple new producers wouldn’t hurt.
[Krieger]