We're taking the rest of the afternoon off to hunt down some goose fat for tomorrow. We'll be back on Monday, have a happy and healthy holiday. 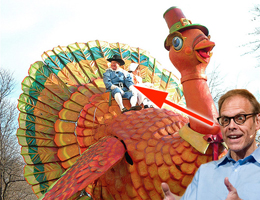 THE SIFTONATOR — While you're enjoying a nice Thanksgiving Day off, NYT restaurant critic Sam Sifton will be sitting at his computer, diligently answering all your turkey dinner questions. Head over to Diner's Journal to get in on the fun. [Diner's Journal]

MAYOR MIKE — An absurd poll by the Quinnipiac University Polling Institute reveals that 56% of New Yorkers would not want Mayor Bloomberg to dine with them on Thanksgiving. [WSJ]

CHEFS AT HOME — Fork in the Road polled four NYC chefs — including Anita Lo, Hurricane Club's Craig Koketsu and Recette's Jesse Schenker— about their Thanksgiving plans and rituals. When asked if she sneaks a midnight snack after dinner on the big day, Hill Country's Elizabeth Karmel replied: "No, never. Maybe the liquor cabinet for a nip of bourbon or tequila, but not the fridge." [FitR]