Share All sharing options for: Chef Nate Appleman OUT at Keith McNally's Pulino's 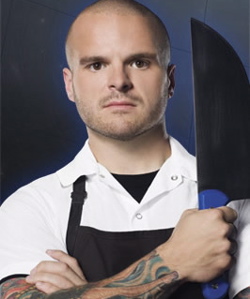 Chef Nate Appleman, who built major buzz for himself in San Francisco before hopping to New York City and taking the job as the founding chef at restaurateur Keith McNally's Bowery pizza play, Pulino's, has left the restaurant, as just confirmed to Eater by Appleman himself moments ago. "It was a mutual split," Appleman said in an email. "I loved my time there and appreciate the whole organization." The news broke to the Pulino's staff at a team meeting at 3pm this afternoon.

Eater hears that McNally has already filled the slot in the kitchen with a chef from his Morandi kitchen; we've contacted McNally but have not yet heard back. The news of Appleman's departure is not a shock, nor would be McNally naming a relative unknown to the post, as has been his modus at many of his restaurants in their early days. It would also explain the recent changes to Pulino's pizza crust and its pizza-slicing technique. Needless to say: DEVELOPING...
Update: Oh that Morandi chef? That would be Tony Liu, one of McNally's institutional chefs who came to Morandi in May 2008 after a long stint at August.
· All Nate Appleman Coverage [~ENY~]
· All Pulino's Bar and Pizzeria Coverage [~ENY~]