Although there are many fantastic dining experiences this city, New York still has its fair share of cheesy theme restaurants. These aren't always your obvious tourist traps, sometimes they can be big budget projects from reputable restaurateurs that somehow went awry. Here’s a guide to the ten most notorious theme restaurants in NYC right now, as well as some helpful tips and tricks on what to order and how to cope should you find yourself at any of these places. 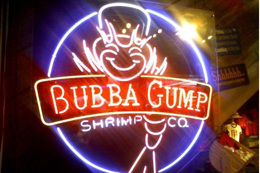 10) The Bubba Gump Shrimp Co.: To our knowledge, Forrest Gump is the only Best Picture winner to ever spawn a chain of overpriced fried seafood restaurants. And although that movie came out 16 years ago, this Times Square behemoth is still going strong today. Here you can get a fried fish smorgasbord known as "Bubba’s After the Storm 'Bucket of Boat Trash'" ($19.99), an app combo called the "Run Across America Sampler" ($15.99) and an entree called "Lt. Dan’s Drunken Shrimp" ($17.99), which is actually kind of offensive, because in the film, Gary Sinise's character became an alcoholic after losing his legs in Vietnam.
Recommended Dish: Yelpers seem to like the "Hush Pups," $9.79.
Biggest Rip-Off: "Mama’s Southern Fried Chicken", $17.29.
Notable Piece of Merch: The ‘I Gotta P’ License Plate, $8.95.
[Photo] 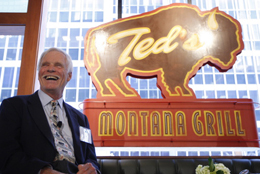 9) Ted's Montana Grill: Do you like CNN and bison meat? Then perhaps you might enjoy Ted’s Montana Grill, the turn-of-the-century Western-themed mega-restaurant in the Time Life Building from mogul extraordinaire Ted Turner. The décor is McCabe and Mrs. Miller meets Restoration Hardware, the menu is a mix of burgers, big-ass salads and things cooked on cedar planks.
Recommended dish: From Citysearch user Zsach: "My 11oz Kansas City BISON Strip was good value and came out just great and tasted great."
Biggest Rip-Off: Message board users have mixed feelings about the $15 bison burger.
[Photo] 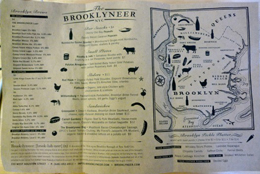 8) The Brooklyneeer: All the fun of the Brooklyn Artisanal/Farm-to-Table/New American/etc. cuisine, without the stinky subway ride! This place is only a few days old, and yet it already has the feel of a gimmick-restaurant classic. Best of all is the menu’s map, which makes Brooklyn look like Pennsylvania Dutch Country.
Recommended Dish: The lone Yelper that's been here recommends the kimchi and salt-boiled potatoes.
Biggest Rip-Off: Too early to tell, but all of the sliders are $11. 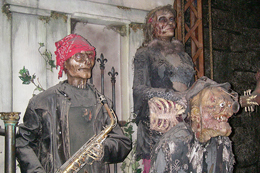 7) Jekyll & Hyde Club: This four story space near Central Park is like the bastard child of The Sizzler and a Spirit store. Right now, they’ve slapped some Santa hats on their animatronic ghouls in honor of the holidays — they’re open on Christmas Eve and Christmas Day. So if you want to celebrate the yuletide spirit with an $18 bowl of spaghetti in a place where guys in capes will jump out at you on your way to the bathroom, you know where to go.
Recommended Dish: Even Yelpers hate this place. Amy C. from Brooklyn thought the Penne A la Vodka was okay, though.
Biggest Rip-Off: N/A
[Photo]

6) Mars 2112: There are a lot of weird things about this subterranean space-lair, but one stands out above the rest: they actually offer etiquette lessons to New York City schoolchildren here. Take a look: 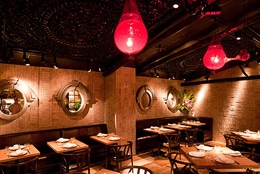 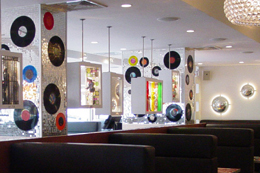 4) Vynl: True to its (creatively misspelled) name, this NYC mini chain is all about good, old-fashioned records — you know, the kind that your parents used to listen to and your self righteous audiophile friends currently listen to? LPs are hung up on the walls, the bathrooms are musician-themed, there's a "hall of fame" of Barbie dolls dressed up like MC Hammer, Sonny and Cher and others, and the menus are made out of — yup, you guessed it — old records sleeves.
Recommended Dish: People generally have very good things to say about the mix of Asian and American diner food here.
Biggest Rip-Off: There's a $22 lobster roll.
[Photo] 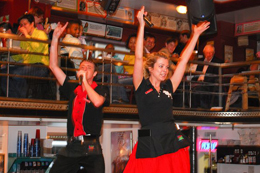 3) Ellen's Stardust Diner A 50s-style diner full of old junk from that era — a model train set runs through the dining room, they screen old black and white TV shows, there are murals of “greasers” on the walls, etc. And as a bonus, something else that’s also annoying, if not period specific: the waiters sing showtunes at you while you eat.
Recommended Dish: Apparently the milkshakes aren't bad.
Biggest Rip-Off: This Yelper described their $9 bloody Mary as "Campbell's condensed tomato soup and vodka."
[Photo]

2) Ninja: Frank Bruni wrote the definitive review of this pricey Tribeca sushi dungeon where the waiters do magic tricks for you. That's always worth a re-read, but for a full multimedia experience, here is a (creepy) video of what's in store for you there:

Recommended Dish: A drink actually: they're running a $2.95 Sapporo deal right now, they claim it's the "lowest price in Manhattan."
Biggest Rip-Off: Bruni was particularly astounded by the $45 fatty tuna steak. 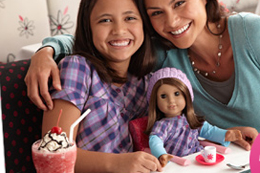 1) American Girl Cafe: A full-service restaurant inspired by the popular dolls. No man has ever made it out of here with his sanity intact.
Recommended dishes: N/A
Biggest Rip-Off: Lunch is $24 per person, dinner is $26. Dolls dine for free, kids are full price.
[Photo]