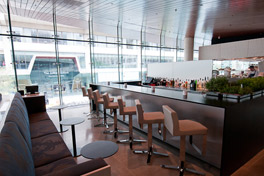 There is surely a little gas left in Adam Platt's Starship Enterprise, but is Wine Director Aaron Von Rock the Captain Kirk to Chef Benno's Spock? Perhaps, but despite the ease in which Lincoln can be likened to Star Trek's depiction of interplanetary warfare, one cannot fictionalize the hard realities of the restaurant's shortcomings. Unfortunately, the wine list is one of them.

Wine Director Aaron Von Rock—formerly of Verbena and most recently of Telepan—is a veteran of the industry. Clearly, he has a deep knowledge of wine, but what he lacks at Lincoln is savvy. The list reads like any number of Italian lists fashioned several years ago. The selections favor the safe and recognizable over the unique; the list lacks even a glimmer of progressiveness. However, this may be a conscious decision built around the inevitable gang of fussy pre-operatic folk that are sure to crowd the Enterprise. So be it.

The real problem is less about the specific producers chosen and more about the appropriateness of the list in the context of what Chef Benno and the Patina Group seem to want the Lincoln to be. It's great that half the list falls under $100, but how much sense does it make to have a sizable selection of wines around $45 when several appetizers will run you more than half that? Affordability isn't necessarily something to complain about in and of itself, but when the list's high end is thin and stacked with wines far too young to consider (even the verticals toward the back of the list barely graze the mid 90s), it seems to be at odds with the restaurant. In other words, it's easy to wonder whether everyone behind the Lincoln is on the same page.

The mark-ups are much kinder than one might expect from a 20 million dollar restaurant with $20 tripe and a slew of bills to pay. That's appreciated. But if Lincoln is striving to be a top-shelf Italian restaurant helmed by one of the country's most talented chefs, the wine list should be a lot better than it is. There's little doubt that Aaron Von Rock is capable of co-captaining the craft, but as it stands, it's still in need of some serious servicing.

Bang For Your Buck
Pinot Bianco 'Vorberg' 2006, Terlano $65
One of the finest Pinot Biancos out of Italy. Aged on the lees for 12 months and capable of outliving most of the PB produced in Italy. Only a small quantity of this vintage made it to the US and most has already been consumed.

Verdicchio dei Castelli di Jesi Riserva 'San Paolo' 2005, Pievalta $65
New project from Barone Pizzini, an estate originating in Lombardia that is most famous for their Franciacortas. This is also lees-aged (24 months) and is a richer take on Le Marche's star white variety.

Colline del Genovesato Rosso 'Il Granaccio' 2008, Bisson $55
100% Grenache from the Italian Riviera that stands as a testament to how well this grape does here. A totally unique expression of the variety: concentrated, hugely aromatic, and lithe.

Soffocone 2007, Bibi Graetz $75
Bibi Graetz is an artist turned winemaker whose Tuscan wines have found a real stronghold in NYC. The Soffocone is sourced from the hills overlooking Florence, and is consistently a solid go to for just about any walk of wine drinker.

Off The Beaten Track
Santa Chiara Pagliaro 2008, Paolo Bea $85
Perhaps the finest vintage of Santa Chiara that paolo bea has ever made. Polished, complex, and a true beacon for those winemakers looking to make skin-fermented white wines. Orange, savory, and great wine to bridge the fish/meat gap with.

Kalterersee Auslese Classico Superiore 2009, Caldaro $40
If you're going by the German Prädikat system for designating wine, "Auslese" would suggest that this is a late harvest red wine. However, Auslese literally means "selected harvest" and here the word is literal (i.e. has to do with selection and not ripeness). 95% Schiava (local to Alto Adige) and 5% Lagrein (also local). 100% confusing

Muller Thurgau 2009, Muri Gries $40
This mutant varietal invented in the late 1800s is now one of the most widely planted new breeds in all of Europe. Clean, aromatic, and huggable. Here from one of the more interesting small producers out of Alto Adige.

Valpolicella'Ca' Fiui' 2009, Corte Sant' Alda $45
This is vinified via the Ripasso method (the fresh juice is passed through the skins and must of the dried Amarone grapes), but it dares not sacrifice any freshness in exchange for concentration. From one of our favorite producers in the Veneto, this is forward, spicy, and charmingly rustic.

Under $40
Nothing under $40, but several right on the mark and you'll do better with the whites.

Break The Bank
Taurasi Radici 1999, Mastroberardino $140
The benchmark for Aglianico in Campania. Beautifully integrated and bursting with dust and minerality. If there is any bottling that warrants Aglianico's designation as the "Barolo of the South" it's this guy.

Barbaresco 'Santo Stefano' 1999, Bruno Giacosa $285
The mention of Giacosa gets wine geeks giddy. He is one of Italy's greatest winemakers (if not the greatest). His 99s are just now starting to unwind and show their stuff. Give this a splash in the decanter to break through the trademark austerity.

WTF?
'Rocche del Faletto' Riserva 2004, Bruno Giacosa $750
A wine with tremendous potential, but one that's an absolute asshole at present. So tight and locked down that it will take a decade to get through to it. Not worth shelling the coin for a wine that should be in the cellar, not on the list.