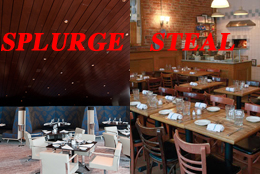 5) Lincoln/Celeste: Jonathan Benno's ambitious new restaurant in Lincoln Center has drawn early raves for his modern take on classic Italian cuisine. The aim here is squarely fine-dining, but for those looking for an equally diverse menu of expertly cooked favorites around the West Side arts district at a much more reasonable price, consider neighborhood gem Celeste, on 84th and Amsterdam. This restaurant, specializing in Neopolitan fare, offers a similarly diverse menu of salads, antipasti and fritti to start as well as rustic seafood-based pastas and gnocci as a mid-course, all for around $10. For mains, you can choose from several traditional fish filets, roast chickens and saucey meat dishes for around or $15 or less. It's true, you won't find the exotic ingredients, finessed preparations or artful presentations here as you will at the Benno restaurant, but the menu is time-tested, and sure to satisfy. [Photo, Photo] 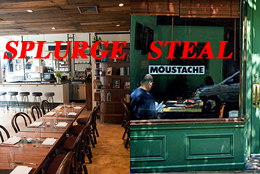 4) Balaboosta/Moustache: Chef Einat Admony's new Little Italy restaurant serves a refined take on Mediterranean classics, in a cool dining room with a strong neighborhood vibe. Although Balaboosta is not a truly pricey restaurant, the menu is full of appetizers and small plates that you want to order a few of in addition to your mains, so things can add up pretty quickly. For expertly cooked Middle Eastern fare, in a similarly cozy, convivial setting, consider Moustache in the West Village – it's not only some of the best food of its kind in Lower Manhattan, but a steal for the neighborhood. Here you can get any number of fresh baked breads and house-made spreads and dips, and although you won't find any of the nuanced seafood dishes, pastas and roasts of the Balaboosta menu, there are several hearty lamb and sausage dishes, and stuffed pies to satisfy any serious meat craving. No entrees are more than $16, most are $10 or less. The brick-walled dining room can be cramped and noisy at times, but the atmosphere is festive, overall. [Photo, Photo] 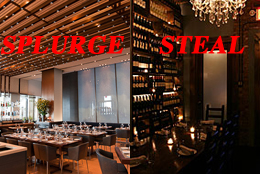 3) Riverpark/El Ay Si: The early word on this Tom Colicchio-produced, Sisha Ortuzar-helmed project has been very strong, with most of its supporters noting that the menu, though all over the place in terms of style, ingredients, and preparations, is consistently good. As much as its creators have talked about how it's an "everyday" restaurant with both a bar and a dining room menu, the apps hover in the mid-teens, the entrees in the 20s and 30s. For a similarly eclectic Nouveau American menu, priced for true everyday dining, head directly across the river to Long Island City's EL Ay Si. This new restaurant from a former chef at EU features inventive, well-sourced appetizers in the $7-$11 range, and creative takes on premium proteins as the mains in the $10-$20 range (most are under $15). The menu at this dark-hued dining room features an equal mix of comfort food classics, regional American specialties, and seafood dishes as at Riverpark, and although you won't get that fantastic view here, you can walk a few blocks and see the river from the Queens side, if you like. [Photo, Photo] 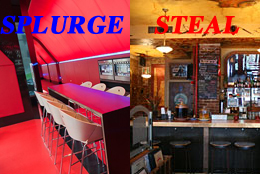 2) Bar Basque/Euzkadi: Basque cuisine often gets lumped in with general Spanish food at a lot of tapas restaurants, and so part of the appeal of Jeffrey Chodorow's newest splashy Midtown concept is its expansive menu of fare inspired by the Basque region. While Bar Basque promises a fun night out, with some potentially very interesting food, it comes with a pretty hefty price tag. So, for a similarly lively night out with some Basque flavor, head to Euzkadi in the East Village. The vibe is more boisterous than chic, and the cuisine is less polished, but just as unique. Signature tapas like the quail in chocolate sauce or shrimp with chickpeas are priced around $10, with many more simple dishes, like charcuterie and croquettes much lower than that. The restaurant also offers a solid, budget friendly deal weeknights from 5-7pm of two tapas, plus a drink for $16.95. And for a more formidable, splashy feast, their massive paella for two is $42 — a similar dish uptown is $36, per person. Like the Chodorow behemoth, the dining room at Euzkadi also features the color red, prominently. [Photo] 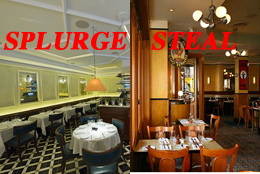 1) The National/Cafe D'Alsace: The menu at the new restaurant inside the Benjamin Hotel features Geoffrey Zakarian's signature knack for reinterpreting classic European fare with distinctly New-American flavors, in a chic, timeless bistro setting. For all the fun of a bustling, brassy dining room at a much lower price point head to Café d'Alsace, a few 6-Train stops north on the Upper East Side. The menu at this neighborhood staple is made up of Alsatian classic, with a few American comfort foods thrown in for good measure. Just like at The National, you can tailor your meal towards something light, or something decadent. Here you'll find a great plate of steak frites and a number of sturdy roasts and chops, priced in the upper teens, and classic French-style soups and salads for under $10. Even if some of the more premium mains crack the $20 mark, they are accompanied by sides and starches for a good seven or eight dollars less than similar dishes at the National, which are served steakhouse-style. Here you'll also find something great that Zakarian's newest doesn't offer: nine different fantastic tarte flambés, most priced around ten dollars, with a few extravagant varieties like steak tartare and sweetbreads-topped pies in the upper teens. [Photo, Photo]

The National Bar And Dining Rooms