Yesterday's shocking news that big time restaurateurs and Empire Builders of the Year Chris Cannon and Michael White are on the road to divorce got us to thinking about all of the other big industry break ups in the distant and not so distant past. There are much too many major divorces to list here—and as always, make sure to mention any omissions in the comments—but, here, now a trip down memory lane as we recall some of the great partnerships—between chefs and owners, between owners and their partners—that are no more. Some splits are more acrimonious than others: 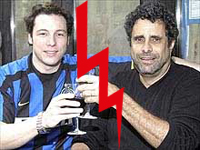 1) Major Players: Jeffrey Chodorow and Rocco Dispirito
Projects: Rocco's
Reason for Split: The feuding between these two took place on air during the reality show The Restaurant. Things got so bad that Chodorow went to court to dissolve the partnership, and DiSpirito followed with a countersuit. The restaurant eventually closed, and it was one of the least amicable splits in the modern restaurant world.
Further Reading: here (great, lengthy profile piece)

2) Major Players: Chris Cannon and Scott Conant
Projects: Alto, L'Impero
Reason for Split: Long standing disagreements ending in nasty suits and countersuits. Said Conant at the time, "There is such a thing as the Peter Principle, where people rise to their level of incompetence. And it just became clear to me that maybe I was associated with a group that was in that category."
Further Reading: here, here 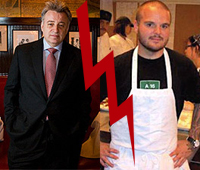 3) Major Players: Nate Appleman and Keith McNally
Projects: Pulino's
Reason for Split: Said to be mutual differences with McNally replacing Appleman with his chef from Morandi, Tony Liu. Secret sources cite Appleman's "personality" and issues working with others as the main cause. McNally also had a well publicized split with his one time Morandi chef Jody Williams, supposedly because of her one star Times review.
Further Reading: here, here

4) Major Players: Laurent Tourondel and Jimmy Haber
Projects: BLT Group
Reason for Split: Laurent Tourondel lent his name to the his BLT Restaurant Group, but the group split earlier this year, leaving a fight over the BLT name, the restaurants, and all future plans. The group kept almost all of the NYC restaurants. The split was incredibly acrimonious and ended in a lawsuit when Laurent opened LT Burger in Sag Harbor and was sued by BLT for serving a copycat menu.
Further Reading: here 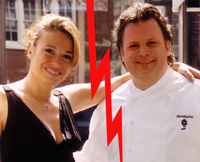 5) Major Players: Donatella Arpaia and David Burke
Projects: davidburke & donatella
Reason for Split: The duo went their separate ways in a quiet split that seems to have been a somewhat acrimonious one. David continued with Burke in a Box, Fishtail, his bowling alley deals, a brief appearance on Top Chef Masters. Donatella went to Psilakis and later to independent projects. Burke kept the restaurant which is now called David Burke Townhouse.
Further Reading: here

6) Major Players: Donatella Arpaia and Michael Psilakis
Projects: Mia Dona, Kefi, Anthos
Reason for Split: Donatella's new relationship didn't work out well either. She and Psilakis split up two years into their business partnership. She went on to focus on her TV show and cookbook situation and her new projects Donatella and DBar. She sold Anthos and it reopened as a steakhouse. Psilakis went on to open Gus & Gabriel which has turned into the soon to open Fish Tag and is still working on an alleged Williamsburg beer garden.
Further Reading: here.

7) Major Players: Chris Cannon and Michael White
Projects: Alto, Convivio, Marea, Osteria Morini, two NJ restaurants
Reasons for Split: According to insiders, the partnership started going downhill when Michael White started getting more and more attention for his work at Marea. White, who is not an owner in Alto or Convivio, will walk away from those restaurants. It has been speculated that he and his CEO and moneyman Ahmass Fakahany will keep the rest and buy Cannon out of his minority stake.
Further Reading: here

8) Major Players: Silvano Marchetto and Giovanni Tognozzi
Projects: Bar Pitti
Reason for Split: Giovanni used to work for Silvano in the 80s and they became partners with Giovanni receiving a 50% share in Bar Pitti. But a disagreement in profits and direct competition from Silvano's other restaurant Da Silvano up the street (which he had sole ownership of) sparked a feud. Now Silvano and Giovanni pretendi the other doesn't exist.
Further Reading: here

9) Major Players: Andrew Carmellini and A Voce
Projects: A Voce
Reason for Split: Never really came to light, but the A Voce owners expanded to Columbus Circle sans Carmellini and replaced him in both restaurants with Missy Robbins. Meanwhile Carms went on to open Locanda Verde and, now, The Dutch.
Further Reading: here, here

11) Major Players: Ryan Skeen and everyone
Projects: Resto, Irving Mill, Allen & Delancy, 5 & Diamond, Fish Tag
Reason for Split: Ryan Skeen has been through four restaurant in three years, and there have been hints of recent trouble at his newest spot Fish Tag.
Further Reading: here