Share All sharing options for: Ray Isle on His Favorite NY Wine Lists, Regions to Watch

Throughout the New York City Food & Wine Festival this weekend, Eater welcomes bloggers, journalists and food world stars to our lounge at the Standard Hotel. As the peeps pass through, we're going to chat them up and spit out the dialogue here in this business, From the Eater Lounge. Right now: Food & Wine's Ray Isle. 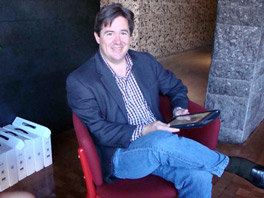 For a recent column for Food & Wine, you created your own wine list for an imaginary restaurant. Tell us a little about the experience. It was a blast. I got to create my own wine list without any financial repercussions which was really nice. What was actually cool about it is after I created a list for this fictional restaurant, I sent it to a bunch of professional sommelier and wine industry people and said basically do your worst, take it apart. How did they take it? They liked my choices in terms of taste, which was very flattering. But as far as what will sell and where my holes were, there were surprises. They said a lot of things, a $50 bottle of Beaujolais for example, will never sell.

Putting a wine list together for a restaurant you have to be able to sell it. But writers don't have to think about that. I think about wine as a consumer. But to reverse engineer it and think what will someone want to buy is challenging.

Which restaurant is serving your Ideal wine list? I love to list at Bar Henry right now. You can buy half a bottle and he'll sell the rest of it by the glass.

I like the wine lists, particularly in Italian restaurants now, that have shifted into going in depth. If you look at Marea's list for instance, there's the traditional there, but then there's Riesling from Piedmont. Riesling in Piedmont? It's really dry and wonderful. In general, New York is a great wine list town. There are more restaurants here with more great wine lists than anywhere I've ever been. You can go to Seasonal where you can get a wine list that's very deep in Austrian wines. Then you have great wine bars like Anfora that Joe Campanale just opened. It's great as a wine bar because everything on the list is interesting. There are no dull safety choices.

What about trends and predictions going forward? There is a lot more willingness to put pretty unknown wines on the list, not just on the list but on the by the glass pour. You're getting pretty esoteric wines now being poured by the glass. If you look at whites, you used to see chardonnay, pinot grigio, and now you're seeing friulano, and people are getting nudged towards trying things. Consumers are much more experimental about buying wine. I think there's a coming together of cool small importers popping up and really cool tiny wholesalers and then restaurants that are kind of going deep into specific regions, showing what a country has to offer. It's a great time to be trying restaurants.

You have to figure out, is it a delusion within the wine industry and or are people actually drinking more wine? Wine is on a small but steady incline up, just dollars spent on wine and wine consumption per person -- there were some dips but generally speaking we're buying more wine. The U.S. is in line to be the biggest wine consumer in the world by I think 2011 or 2012. So the U.S. is becoming more and more a wine drinking country. Before we were a beer, milk, and soft drinks country. And milk and soft drinks don't go well with food. So for me as a wine writer it's a thrill.

2011, what's the region to watch? The long shot region to watch it Croatia. Slovenia was the darling of sommeliers over the past couple of years. The northern part of Croatia -- Friuli, Slovenia we're talking about the same kinds of grapes. But there are interesting wines there that haven't made it to the U.S. yet. And I think that not so much region but I don't think that the natural wine, orange wine, non interventionist, donkey's pulling the hoe, all of that has run out of steam yet, particularly in markets like New York, where you have a broad enough audience to get into that kind of thing. You've got a place like Ten Bells, which is packed, and all they do is that kind of wine. But yes, in terms of off the radar, I'm interested in Croatia.
Interviewed by wine pro Talia Baiocchi