Throughout the New York City Food & Wine Festival this weekend, Eater welcomes bloggers, journalists and food world stars to our lounge at the Standard Hotel. As the peeps pass through, we're going to chat them up and spit out the dialogue here in this business, From the Eater Lounge. Right now: Hearth and Terroir's Marco Canora. 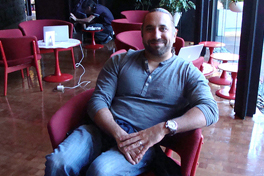 Where are you spending your time these days between Terroir and Hearth? I spend most of my time at Hearth, at least five days a week.

What are you working on now? We're transitioning to the fall menu, so things like octopus, papardelle, vegetarian pasta, and our charcuterie program. We do charcuterie for two, that's really fun.

One thing I really admire about Hearth is the certain element of value — that prix fixe is 35 dollars.The last couple of years have been really tough in the economy. We're on a tough corner 1st Ave and 12th St. in the East Village, right by Momofuku Ko, so we try to be conscious. We're in a cheap eats neighborhood and we try to offer different options. It's very much a neighborhood restaurant. We love our neighborhood, we love the people in it, and we want to acquire that clientele. I find that once we grab someone and then they see what we do, then people recognize the value when they come dine with us at Hearth, and they come back.

It seems like the trend in the past three to four years is doing things in house — why did you guys start doing that? It's a great way to utilize products, and it's a whole lot of fun to transform these things. People dig it. People love salty pork products. Especially things from our charcuterie program — our ballotines, terrines, etc.

And you're a contestant on this season of Next Iron Chef? Reality TV is a bizarre world. I've done plenty of TV — The Today Show, Martha — but I've never done cooking reality television. I was very on the fence about subjecting myself to theatrics and those kinds of scenarios. I watched the first episode last year, and I saw a guy get kicked off because he didn't cook grasshoppers well. I would kill myself if that happened. I thought, "Wow, do I really want to take a chance with that?"

And how'd it go? It was challenging and fun and new and exciting and invigorating. Being a chef is so much about team building and being in your own court, and this was unique. Because it was just me, cooking, usually in under an hour. It was a really cool experience to learn what I'm capable of. I liked it, I'm really glad I did it.

Sometimes concepts don't work in Tribeca — it seems like yours is a major hit. The reality of this town is that the real-estate deal drives the deal. We knew we wanted to expand the Terroir concept. When we opened in Tribeca, there wasn't a wine bar, and it's one of the highest income zip codes in New York, tons of discretionary income, and a lot of wine lovers. Every restaurant in Tribeca is a proper restaurant: apps, entrees, dessert, a very formal experience. We were the first guys to do a restaurant with no pretense: a plate of olives for three bucks, a glass of wine for eight, and you can just sit there for an hour. And the neighborhood has totally embraced it. Customers run the gambit — from the four tops that splurge on wine and stay for three hours to the people just coming in for some olives and half-glass of wine.

Are you thinking about expanding? Absolutely, we want to and we really will. I want Hearth to be a one-of-a-kind restaurant and and focus my energies? the chef artistry happens there. I don't know how people like Daniel blow up and pull it off. You need so much attention, there's so much room for error with a la minute preparations. I have no desire too do multiple Hearths, it takes too much talent to do well. A concept like Terroir can expand. We didn't dumb down the menu, but it's not much a la minute, much easier. The concept is conducive to growth. But still, grow slowly and do it right. The pitfalls of growing is too much too fast. I'm of the marathon mentality, better to be the turtle and not the rabbit.

So where are you looking at? West Chelsea, Upper West Side, North of UWS, like the 90s, 110s. I'm really interested in finding underserved neighborhoods. I'm not so interested in other places, like the heart of West Village, where the rents are through the roof.

Where are you eating? Akhtar [Nawab] is at La Esquina, a super-talented guy and putting his skills in the mexican food world, I think it works and it's tremendously tasty. I go to see Ralf at Trestle On Tenth, an underrated restaurant, he's a big greenmarket seasonal advocate. Benno opened Lincoln, I was fortunate enough to go to friends and family. The spectacle is impressive.

What you been up to at the festival? Well, I was filming Next Iron Chef when all these requests came in. There's Meatball Madness I would have done — burgers and tacos are not so much my thing — but i missed the boat. There's always next year.