Michael Laiskonis on the Pastry World's Time in the Spotlight

Share All sharing options for: Michael Laiskonis on the Pastry World's Time in the Spotlight

Throughout the New York City Food & Wine Festival this weekend, Eater welcomes bloggers, journalists and food world stars to our lounge at the Standard Hotel. As the peeps pass through, we're going to chat them up and spit out the dialogue here in this business, From the Eater Lounge. Right now: Le Bernardin's Michael Laiskonis. 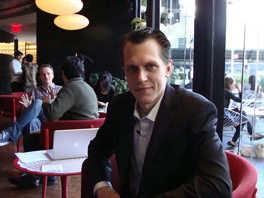 Eric Ripert has always said he's no longer a yeller in the kitchen, that he is a quiet leader. What's your management style? Especially on the pastry side, I’d like to think we’re less intense. I tend to internalize I find you’ve got to lead by example, so as is the case with the chefs working for Eric or Thomas Keller, the chefs don't want to let me down.

How many people do you have? In pastry we’re eight all together.

How are you feeling after the Michelin review? And how did you celebrate? It’s always great, it’s always a sigh of relief to celebrate for a day. But then you have to get back to work. Do you think it changes business at all?
Oh for sure and of course having the Zagat score the same day so we’ve already seen that we’re busy then the past two years.

Did you notice a dropping off a bit after the economy crashed? It’s hard to think back two years but I know I felt it a bit. I think the whole city probably felt it but everyone I talk to is busy now, so that's great.

I’m wondering your opinion on Just Desserts. I think it’s great I’ve got to be honest. I was a guest judge. It’s pretty much the only reality show I watch in addition to Top Chef. Do you think the pastry world translates well to television? I think so, especially with Top Chef, everyone is so talented. It’s a way for people to say “Okay what are all these chefs able to do?” so you have to make a souffle, you have to make a pastry. The ones that prevail across the seasons are the ones that have an innate sense of ratio, because you can't use recipes and you can't really memorize all of your recipes.

Do you think it shows off talent? I think so and I think there is a little bit of drama that’s not representative of all pastry chefs. Those that can keep a cool head do well.

So what do you think of rockstar thing happening with pastry chefs? I don’t know. That can only be a good thing. I mean Johny Iuzzini certainly has the talent to back it up. Finally getting the attention pastry chefs deserve? Sure, I mean you know we’re kind of the red headed step children of the kitchen. We’re kind of tucked away in a corner of the basement. I think in the past 10 years people are going to a restaurant with a dessert in mind as well.

And it’s also the first course you would cut out. I’m kind of lucky: I have a captive audience at Le Bernardin because it's a tasting menu.

Which restaurants have you enjoyed recently? In New York, Eleven Madison of course. Unfortunately, I don’t get out enough. I’m a big fan of Aldea and one of the pastry chefs there is my former assistant so it’s been fun watching her step out of my shadow. I’m excited to see what happens with Ai Fiori. I heard Michael White chef has Bob Truitt now, although I’m sad to hear him leave Corton because he was so well matched with Paul Liebrandt, I’m excited to see what he does. I also love what Brooks is doing at at Del Posto. So you agree with Sifton's take? Yes, it's so funny, he got three times as much ink as everyone else. He’s a friend and it’s great to see that happen.

What about Jehangir Mehta? He’s mixing sweet and savory and doing a lot of interesting things. You can kind of do that through his Indian sensibilities. He can do that. He’s very detail oriented and subtle enough. Sweet and savory can be difficult, you don’t want to beat people over the head with it.

Speaking of Aldea, your wife works there. How does that work with the both of you being so busy? It's actually perfect because we have the same schedule, so we have dinner at 2 AM together. We end up being a regular working couple, just six hours later than most.

What's going on with your blog? I'm working on a book right now. I don't have a deal yet, but right now I'm focusing on just getting the book written.