Andrew Carmellini on American Food and the Dutch

Share All sharing options for: Andrew Carmellini on American Food and the Dutch

Throughout the New York City Food & Wine Festival this weekend, Eater welcomes bloggers, journalists and food world stars to our lounge at the Standard Hotel. As the peeps pass through, we're going to chat them up and spit out the dialogue here in this business, From the Eater Lounge. Right now: Locanda Verde's Andrew Carmellini. 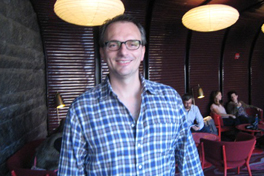 How's your soon-to-open Soho restaurant, The Dutch, coming along? Ah, it's standard New-York-whatever. We're getting a lot of help from the Bloomberg task force that helped with Eataly. It's a task force that helps projects like ours get through the permitting quicker, so that's really helping us get to the finish line. It's going to get us there by the end of November, early December.

We've heard snippets about what the space—which used to be the iconic Cub Room—is going to look like. It's a great space. I moved to New York in 1990, and Cub Room got three stars [actually one star] from the New York Times in 1994. I've been obsessing about that corner for a long time, so when it became available—which was right after we opened Locanda Verde—I went at it pretty hard. By that point, the space was gross. It had gotten taken over by some Russians that used it as a money-laundering operation.

We took everything out and cleaned it up. The Dutch will not look like the Cub Room. It's going to have three spaces. Front spaces are two rooms—a bar and an oyster room for walk-in business. Back is reservations only. Front is a little bit more bright and feminine, back is more handsome, tavern-like.

Will it be the same menu in front and back? Yes, same menu.

And are you taking a regional approach to the menu? No, not regional. It's going to be stuff I like to eat. An exploration of being an American chef, which I feel at times has a negative connotation. It's not New American, it's not Modern American—it's just American. It's going to be a bit of an exploration, a journey. We're cooking every day, we're working on recipes.

When did you get the idea to do a restaurant like this? I always thought of Cafe Boulud as a French-American restaurant. I want to approach that idea from an American standpoint. It's not just a heritage pork chop on the plate. But it'll be a little bit of that too.

Did you take trips to prepare for the new restaurant? We went everywhere. Clocked 8,000 miles. I did it not because we're doing BBQ, or New Orleans food at the new restaurant, but rather to get in the mood a little bit. We had tamales in Mississippi, ribs in Memphis, hit fish shacks in Florida, and BBQ joints everywhere.

How did you decide on the name? We didn't want to name it after variety of radish, or name it after a farm. Like Locanda, I wanted the name to convey a New York City neighborhood restaurant feel. It should sound like a place you would go at 1am, or for brunch, or to bring clients to.

In the meantime, what should people be on the lookout for at Locanda this fall? Trufflepalooza is coming up, which sold out in half an hour. We just started to change the menu. We usually go to Italy every second year, to Piedmonte, where drink a lot of Barolo and taste truffles.

Where are you eating these days? I like Aldea and Ippudo. Yeah, the Ippudo waits are crazy but it's the best ramen in town.