Ken Friedman and April Bloomfield on Teamwork Together

Share All sharing options for: Ken Friedman and April Bloomfield on Teamwork Together

Throughout the New York City Food & Wine Festival this weekend, Eater welcomes bloggers, journalists and food world stars to our lounge at the Standard Hotel. As the peeps pass through, we're going to chat them up and spit out the dialogue here in this business, From the Eater Lounge. Right now: April Bloomfield and Ken Friedman, partners at The Spotted Pig, The Breslin, and the forthcoming rebirth of The John Dory at the Ace Hotel. 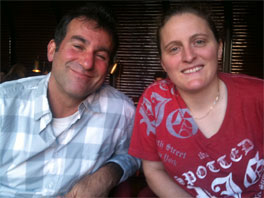 We have the pleasure of talking to both of you a lot, but I can't remember the last time we got the opportunity to speak to you two together. KF: It's true. In the almost seven years we've been partners, it's usually her or me. Which maybe has been bad for us—last time [with the John Dory 1.0], I fucked it up by telling the world it was going to be a three-star restaurant. If April had been sitting there next to me, I wouldn't have said that.

So, John Dory 2.0, at the Ace Hotel. We heard an update a few weeks back. What do you know now about it that you didn't know then that you can share with us? KF: Every chair will be a stool there. AB: Stools with backs on them! You're the first to know that. We went to L.A. recently and sat at this bar with stools that had backs on them. We had an epiphany that it was so comfortable.

And the food? AB: The food is going to be a lot more clean, with less butter. KF: She saw me naked, that's why. AB: More bar-oriented: raw bar and crudo. A lot more bar and a lot less restaurant. KF: [applauds] Well put. You know why? Bars are fun. Restaurants are not.

How do you create the kind of fun found at The Spotted Pig and The Breslin? If it was easy, everyone would be doing it. KF: The easy part is creating a fun bar to hang out in. The hard part is making it so it can last for years and years and years. The answer is great food, consistently great food. That's what we've created together. I always wanted to do bar with great food and that's what The Spotted Pig was. John Dory 1.0 wasn't that. With that, we thought, let's do a restaurant. But neither one of us dresses up or goes out to fancy restaurants. So why not do what we do and what we like instead? I relate it to, I was in the music business before restaurants. And I feel like we decided with John Dory 1.0 that we didn't want to recreate our first album. But the reality is, this is a business—you're using other people's money and people's jobs are at stake. You can't be all conceptual and arty about it. We do have a formula that works. It worked really well, so why not do it again and change it a bit?

Going through the failure that you went through together with John Dory 1.0 might have torn some partnerships apart. How did you guys manage to work it through together? AB: I think we are really good at communicating, about how we see stuff. That puts you in good standing for rough weather. Overall, we have a mutual respect for each other. That's pretty much the foundation. KF: If we don't talk for awhile, because we both get so busy, April will say to me that we need to get together and have a drink and catch up. It's that. But it's also respecting what the other does. I can't do what she does. She can't do what I do. Instead of trying to make her come out and shoomze at the tables, she does what she does. And says to me, 'Stay the fuck out of my kitchen.' And I do. And when I occasionally walk in there, she finds out about it and says, 'Never let it happen again.'

KF: Opening a restaurant is like giving blood. You put your life on hold, relationships on hold, you don't talk to mom, you don't go to gym. So when it gets to the point when worst possible things happen and it closes, it's traumatic. We looked at each other [at John Dory 1.0] and said, we can't make this work here. We were on top of the world [with Spotted Pig] and then suddenly the next one didn't work. It made us appreciative of every customer even more, and our staff—and location location location. There was no chance of it tearing apart at all. We needed each other. Next was Ace Hotel, 29th and Broadway, where we were pioneers again—and thank God it succeeded. We needed each other more than ever to reassure each other that we are not total idiots.