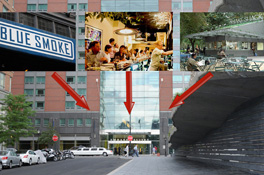 Last night, the Battery Park City committee of Community Board 1 met to discuss, well mostly to discuss bike paths. But, there was also a not so insignificant agenda item on the docket involving one Mr. Danny Meyer and his propsal to open three restaurants in the old Embassy Suites Complex. Not so shockingly, the committee unanimously approved his plans for the culinary wasteland that is the current BPC. One member actually said "the sooner the better."

The opening time frame is a year, year and a half for the still unnamed upscale "signature restaurant", Labor Day 2011 for Blue Smoke, and April/May 2011 for Shake Shack BPC (they hope). Eater operatives on the scene pressed for details on the concept for the signature restaurant, but they weren't prepared to discuss/disclose it. Soon enough Battery Park City, soon enough.
· BPC Gets Shake Shack, Blue Smoke, Third Meyer Restaurant [~ENY~]
· All Community Board Coverage [~ENY~]