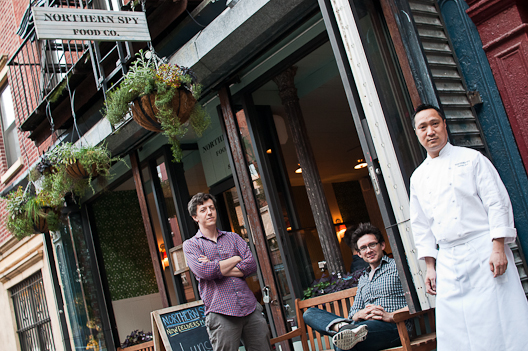 [Krieger, 10/28/10]
A year ago, two vets of the San Francisco fine dining world, Christophe Hille and Nathan Foot, joined forces with a New Yorker, Chris Ronis, to open Northern Spy Food Co., an ambitious grocery/café on a sleepy block of the East Village. We recently chatted with the team about the first year, the neighborhood, what worked and what didn't.

Nathan Foot, chef: Chrisophe and I had been line cooks at Campton Place in San Francisco a long time ago — it was maybe my second job out of culinary school. I ended up leaving to work for Elizabeth Daniel and Daniel Patterson and Chrisophe stayed on board, but we just kept in touch. I always knew I was going to work with him again even though he probably didn’t know that. Christophe Hille, restaurateur: I launched this whole thing in April 2008. I wrote a plan for a business that was quite a bit different than this — a farm-to-table version of prepared foods. Chris Ronis, restaurateur: I am the one that does not come from a restaurant background. But I’ve been in NYC for thirteen years and have a background in marketing, publicity and events, which sort of lent its self to helping us launch the restaurant and get the word out.

How was the build?: CH: We were originally looking in Brooklyn and then Chris found this space in the East Village. I had this crazy idea that we’d be open in four months, five months. Nobody can really teach you how to open a restaurant, you still have to learn by doing. We took the keys to the space in February of 2009 we opened in November of 2009, so it was a nine month process. And even though there were periods where the process slowed down, during all that time something was happening. CR: We learned that nothing takes less than three weeks and nothing costs less than $3,000 — rule of thumb.

How did the opening go? NF: Originally we wanted to be a counter-service restaurant, very casual. When we opened, the economy was so bad. So our approach was to cut down on labor, which meant taking the waiters away and empowering the guests to create their own experience— to order at the counter and sit down. But we were extremely busy on the first night of service, we had people standing and it didn’t work that well. So we went full service after the first night and slowly became more of a restaurant with the market still in tact, but it was a slow evolution. It was not the concept that we had originally planned. CH: I think we made a space that was too nice. We set it up in a way that said, “Sit here, enjoy yourself,” so people treated it that way. CR: People enjoyed the food enough to be a full service restaurant. Which is fine, that’s where our strengths were. Maybe in a more stable financial market we would have been more successful with the grocery part of it.

How did you react to the fact that customers weren't going for the retail aspect of the restaurant? NF: We’d spent so much time doing research and development of what we were putting on our shelves. So, to see it fail right off the bat wasn’t really an option. We wanted to see if we could make the retail pay for its self, but it took us a couple of months to realize that we couldn't. We looked at the numbers, and what a seat would sell during a day, and what we were losing. It made more sense later down the road. CH: We eventually closed down for two days at the end of April and pulled out the shelving. So we went from 20 different products to about five products. CR: Every so often we’d have some people come in and buy eight jars of pickles, but these items were all really specialty items, sort of gourmet non-essentials, perhaps some things that you might buy on a weekly basis. CH: We never heard any complaints or anything once we phased out that market space.

How was the review process? CH: Some critics came in the second week, some bloggers came in the first week. NF: Serious Eats came in the fist week. It was a little tough, and I’m not going to complain because we were willing to take any press at that time given how small our budget was. But there was a lot of expectation given Christophe’s name and the whole San Francisco thing. There was a lot of expectation to see what we would do here, but I think it was a little bit too soon. But it’s fine, we’re a year in, and we’re a completely different restaurant. And it’s weird because the bloggers put us on the map because of the retail, and the individual things we sourced. So, the retail, even though it’s not here, really helped us get our name out there.

How has the menu evolved in the last year? NF: I only knew how to cook Northern California cuisine when we opened. I think initially people were wondering if we were going to do what we did in California or if we would adapt it to the East Coast — I think we did a little bit of both. Did we change? Yes. It’s still comfort food, it’s still rustic, but we implemented a little bit more fine dining technique — it’s more refined. As the restaurant grew, our idea was stay in the same mold, keep the same price point, but continue to offer more refined food and specials that are a little different than the regular menu. CH: And as long as you bring people along slowly, you can bring them there.

Does it feel like a year? NF: It feels like three. CR: We’ve changed so much. It’s never felt like we’ve been riding some kind of wave, we’ve always been evolving and adapting.

What's next? Any expansion plans? CH: I can’t wrap my mind around that. I think it’s very tempting for people to expand early, but your team is never as stable as you think it is. It’s important just to solidify everything. When any of us, especially Nathan, can go on a month’s vacation and not get a phone call or have to manage a crisis, then maybe at that point, we can start to think of something new. But if you have to be here a minimum of five days a week, and you can’t take a week off? Then you still need to focus on the first restaurant.