The Carm's Beer Fest, Marcus Jams, Huang on a Boat

Share All sharing options for: The Carm's Beer Fest, Marcus Jams, Huang on a Boat

A lot of New York chefs are on Twitter these days, but a few actually keep straight up, old fashioned, blogs. Naturally, many of these have to do with food, but often times, they provide an interesting glimpse into their lives outside the kitchen, too. Here's a breakdown of some recent posts of note from the blogs of a few big NYC chefs including Andrew Carmellini, Marcus Samuelsson, Amanda Cohen and more. 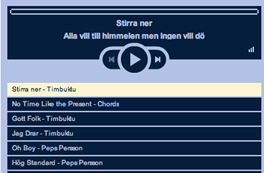 MARCUS SAMUELSSON—For the most part, the blog from the Top Chef Masters star and Red rooster chef/restaurateur has been kind of a snooze lately — especially his interview with tennis pro Annika Sorenstam about cooking/family/philanthropy from yesterday. But Marcus did drop something totally awesome this week: a post about music that includes an interactive playlist of his favorite songs. Turns out Marcus is really into bright, zippy Swedish hip-hop and reggae — hopefully he'll be bumping this at Red Rooster when it opens. Also: he's looking for an intern with good blogging skills. [Marcussamuelsson.com] 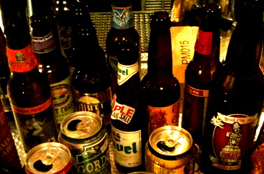 ANDREW CARMELLINI — Everyone's curious about The Carm's new project, The Dutch, and although the majority of his blog posts are a mix of music videos and off-kilter photos and artwork, he does offer just enough behind-the-scenes access to the new restaurant to keep things interesting. The biggest tease in terms of new recipe porn was a pic from a few weeks ago of two sick-looking pies that he was testing out. Earlier this week, he also offered a snap of the beers he's tasting for the bar menu. Also of note: this photo of the chef on a bicycle with a baby pig slung around his shoulder. [AndrewCarmellini.com] 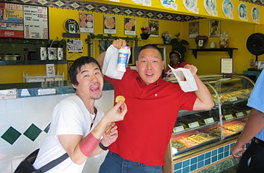 EDDIE HUANG — After filing a few totally epic posts about getting a goose egg review in the Times, the Xiao Ye and BaoHaus chef has mostly been writing about his recent trips outside the city. All the snapshots from his vacation in St. Maarten's are hilarious (especially this one) and more recently, Eddie has been blogging about his participation in last week's Southern Foodways Alliance Symposium in Oxford, Mississippi. He ate a lot of fried chicken on the way there, made 300 shrimp baos for an event, and hung out with writer Francis Lam, too. Also, if you're a fan of his cooking, do check out the food porn from Xiao Ye's new brunch menu. [Fresh Off The Boat] 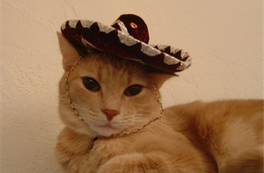 AMANDA COHEN — Following her awesome rant about working a booth at the NYCWFF Grand Tasting, the Dirt Candy chef's musings have turned to more pleasant subjects, like the two year anniversary of her restaurant, which is this week. As the chef explains, two years ago she couldn't conceive of such a milestone, so to celebrate she's giving away free dessert all week. Amanda also wrote about her love of Lambrusco, and filed more entries in her ongoing series of photo posts about the restaurant's staff meals. [Dirtcandy.com] 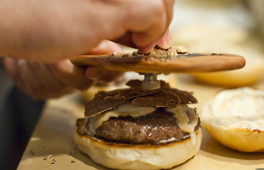 ODDS AND ENDS FROM AROUND THE CHEF BLOGOSPHERE— Johnny Iuzzini's been riding the publicity trail for Top Chef: Desserts pretty hard, he uploaded a few funny pics from a recent appearance on the Wendy Williams Show on his blog. Yesterday Klee Brasserie Chef Daniel Angerer dropped a post about animal-themed Halloween foods, and offered some info about the pet adoptions that are going on at his restaurants this weekend. The newly opened Burger & Barrel now has a Tumblr running some awesome truffle burger porn, and the blog for Bobo in the West Village recently posted an interesting interview with one of their local farmers about sustainability.