Cannon Does Emilia-Romagna A Solid at Morini

Share All sharing options for: Cannon Does Emilia-Romagna A Solid at Morini 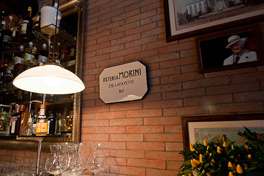 Emilia Romagna is perhaps Italy’s most fable-ready region. It’s easy to imagine it as a land where houses are made of Parmesan, and couches are upholstered in cured pork; balsamic vinegar flows from stream to tap, and babies drink Bolognese. Even in fable, however, the wine comes fifth. Most Italians—and Americans schooled in Italian wine— who were born outside of this fertile central region speak of the wines apologetically in comparison to the areas that flank it to the north and west. And not one restaurant in NYC, save Via Emilia, has ventured to truly showcase the region’s wines. Enter: Osteria Morini.

At Chef White and Chris Cannon’s new dressed-down tribute to White’s seven years at San Domenico—a restaurant in the town of Imola, just outside Bologna—the wines of the region are given center stage. And it’s not just about Lambrusco, though there are eight available by the bottle and three by the glass, in a variety of styles. Rather the list’s virtue lies in its tireless trek outside obvious: Cannon highlights nine other sparkling or frizzante wines and more than thirty-five different white, red, and sweet wines from the region that are likely unfamiliar, even to the well schooled. It is, more or less, a vinous collection of rejects, outsiders, and the misunderstood—a coming of age tale for Emilia-Romagnan wine that seeks to rewrite the aforementioned fable, adding bathtubs of Lambrusco and swimming pools filled with Sangiovese. It’s easily one of the most endearing Italian lists to spring up since dell’anima’s.

It’s not just about Emilia Romagna, though. The rest of the list focuses on neighboring Liguria, Marche and Lombardia, with Tuscany offering a sense of familiarity for those who haven’t recognized anything in pages. Cannon’s palate is populist, offering a balance of modern and traditionally styled wines in a variety of price points. The “Vini Bianchi da Contemplazione” section is designed for nerds looking to break into some skin-fermented whites from the likes of de Batte and Bea. The pricing ranges from standard to a bit high in places, but if you know how to pick and choose, there are a few deals to be had. All in all, it’s an excellent effort and a success, if for nothing else than its ability—in a city overrun with Italian wine lists—to stand out as truly unique.

Bang For Your Buck

Vernaccia ‘Carato’ 2005, Montenidoli $52
Forget all of the watered-down pizza parlor crap you’ve known, Montenidoli’s take on the varietal blows the stereotype to pieces. The Carato is barrel-aged and fermented, making it their richest bottling.

Gutturnio ‘Canalegrande’ 2006, Podere Casale $45
Gutturnio the darling DOC of the Colli Piacentini (a stretch of hillside in western Emilia-Romagna near both Piedmont and Lombardia). The DOC wines are made of a blend of Bonarda (native to Lombardia) and Barbera (native to Piedmont) yielding a fresh, slightly funky red that’s high in acid and perfect with red sauce.

Lambrusco di Castelvetro 2005, Graziano $49
Vittorio Graziano is known as one of the finest producers of Lambrusco and this version--dry, earthy, and grippy--is showing more complexity than your average quaffer, especially with five years in bottle.

Vino Nobile di Montepulciano 2006, Podere Sanguineto $76
Sanguineto is the lifeblood of two sisters in Tuscany’s Montepulciano, and area often dismissed as producing Sangiovese that’s too harsh and rustic, especially in comparison to neighboring Montalcino. However, the two sisters prove that here, in the right hands, Sangiovese Prugnolo can do great things. Bright, earthy, quintessentially Italian.

Off The Beaten Track

Ageno Bianco 2005, La Stoppa $87
One of the best “orange” wines money can buy. The Ageno is a blend of Malvasia, Ortrugo (a variety local to Emilia Romagna) and Trebbiano that spends one month on the skins and a year on the lees. Rich, tannic, and, for lack of better term: exotic.

Verdicchio di Matelica 2009, Bisci $32
Verdicchio gets a lot of love on this list and for good reason. Wherein most of the Verdicchio in Marche is grown close to the Adriatic, those out of Matelica come from land-locked vineyards, but cheer up: none of Verdicchio's freshness and trademark salinity are compromised.

Lambrusco di Castelvetro ‘Corleto’ 2009, Villa di Corlo $39
Another dry Lambrusco that errs on the earthy side. An excellent wine to carry you through the meal, especially at this price point.

Cerico Rosso 2006, Walter de Batte $145
Walter Batte is that famous Ligurian producer that no one has ever heard of. The wines are made in miniscule quantities and break a variety of molds, particularly the whites. However, the Cerico (a rare find on a wine list), a blend Grenache with a bit of Syrah, proves just how much success the latter grape can have in this climate, and just how masterful de Batte is with just about everything.

Brunello di Montalcino 1995, Canalicchio di Sopra $194
This wine and its more expensive Riserva version from 1995 have been floating around the market for some time at relatively inexpensive pricing. While the ’95 Riserva still has some gas in the tank, the normale simply isn’t worth the coin in its current state, especially considering it can be found around town for much cheaper.
WineChap is a start up that seeks to foster more intelligent boozing by demystifying the culture that surrounds restaurant wine lists. Currently the site boasts more than 160 wine list reviews in New York City.
[Krieger]