Hunting Down the Ghosts of The Campbell Apartment

Share All sharing options for: Hunting Down the Ghosts of The Campbell Apartment

Just in time for Halloween, a nightlife industry ghost story. Have any others, or horror stories from terrible meals? The lines are always open. 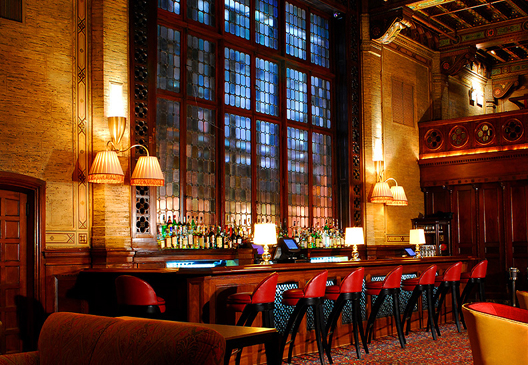 [photo courtsey of The Campbell Apartment]
Once upon a time, The Campbell Apartment in Grand Central Terminal was the office and salon of a big money man in New York, John Campbell. Following his death, it had a sordid, spotty run as a police utility closet and then a jail, until it was eventually saved from total disrepair a little over a decade ago and turned into the lavish cocktail den that it is today. Months ago, a friend of Eater was having a drink there and heard a bartender talking with another staff member about strange phenomenon occurring in the space. When asked what he was referring to, the barkeep politely and graciously declined to speak of such things while open for business. We decided to get in touch with owner and operator Mark Grossich during off hours to see if he might be able to shed some light on the subject.

Is the Campbell Apartment haunted? Mark Grossich: Yes. I feel very strongly that the space is haunted. We have some otherworldly visitors and I’m not bullshitting you here.

What strange things have you or your staff observed? Over the last several years, employees have had instances where they felt someone pushing them from behind when they were walking across the floor, and there was no one there. They’ve felt gusts of cold air coming from out of nowhere. My staff has even reported seeing apparitions of an old, fashionably dressed couple sitting and having a cocktail on the balcony when the place was completely closed. Have customers reported any strange phenomenon? Customers, we’re not aware of. But the staff, most surely. And my staff has told me of these experiences very matter-of-factly.

When were the instances first reported? It was recently. I mean, this has apparently been going on for years, but it was brought to my attention about a year ago, and then a number of the staff corroborated that they’d had similar experiences, seen similar things. Have you tried to do anything about it? We explored the possibility of a séance. I’ve spoken to the Amazing Kreskin, he did not agree to help us. There are all kinds of ghost hunters and stuff like that, but we really haven’t engaged any of those people yet. Obviously we’re very curious to find out what’s going on. But the thing is, nothing bad has really happened yet. If there are ghosts in the Campbell Apartment, they are very fashionable and friendly ghosts. We’ve had no instance of glasses being thrown on the floor or anything like that.

Do you find it odd that no customers have reported any ghost sightings? Well, it makes sense to us because the staff has more of a routine and they would know and notice if something was out of the ordinary. If a customer suddenly felt a gust of cold air, they would assume it was the air conditioning.

Why do you think the space is haunted? Who knows. It was John Campbell’s office and also a salon where he and his wife would entertain guests. He lived very large and had no children, he was a big guy in the financial services industry. Then after he died, it became a bunch of other things including a jail and a signalman’s office where they used to store guns, so it just reeks of having that possibility. I’ve got some staff members that refuse to close this place alone.

By Luke Fortney and Ryan Sutton