FW: Things Not Looking so Good at The General Greene

Share All sharing options for: FW: Things Not Looking so Good at The General Greene 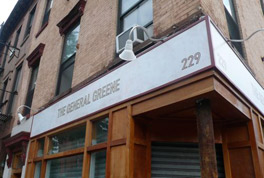 From: [an eater]
Date: Friday, October 22, 2010
To: eater complaints dept.
Subject: Things Not Looking so Good at The General Greene

Has anyone been to this place lately? I'd like to nominate it for Deathwatch.

Two waitresses for the entire place, one of whom wasn't really a waitress, but seemed to be also hosting. A host who was doing what she could, but obviously lacked training or knowledge to really help out. The back portion of the place is now a depressing looking market.

First, we sat, after the hostess "cleared" the table. Oddly, she'd put silver down on top of a dirty table (grime and debris from the last diners still stuck to the table), and, rather than new glasses, left half-filled water glasses from the last. Saving water and all...

After our drink orders were taken, we were told about ten minutes later that they didn't have my drink. Fine, I'll have a beer. Wait, we have that drink. Ok. Waiting, waiting, waiting - when do you have the drinks? Next week?

We did receive our drinks, and, about 30 minutes later, our hamburgers. We had now been there for over an hour, and had finally received food. We watched with some amusement (which rapidly wore off as our drinks sat empty) as patrons looked anxiously around for service, food, anything really. Nothing came out of the kitchen. Then, voila! Two orders would come out. Nothing. Nothing, nothing. Voila! Two more. Really sad. I felt, as a former chef, that at some point I was going to need to give them a hand.

Instead, I give them a Deathwatch nomination. Pretty soon they'll be doing all you can drink brunches and Monday night burger and beer combos. We were told by the hostess that the partners had split. Not sure she had it right, but something has definitely happened, and that place is doomed. It's just a matter of time.