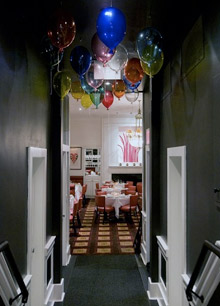 Just off Lexington Avenue on 61st Street there’s a little piece of wonderland called David Burke Townhouse. Past the brick exterior and the digital menus looping a slideshow of dishes from Chef Burke’s summer menu, you’ll find daring dismissal of the art of interior design. Glass, multi-colored balloons are affixed to the ceiling that leads into the main dining room, and bronze statuettes of Humpty Dumpty (maybe 50?) dangle off of every available ledge. “He’s sort of like David’s muse,” says the bartender. Noted. All three rooms are littered with puzzling artwork—including a pastel of Humpty Dumpty and what appears to be the taxicab from Who Framed Roger Rabbit—and mismatched chandeliers turned up so bright that an operating room might feel ambient in comparison. The menus have taken a beating and the bar top is dirty. If you have vertigo, you can’t come here; it’s not safe. For everyone else, it’s best not to take it all in. Stay in one room; don’t go to the bathroom. Watch out for the cheesecake lollipop trees.

Once you’ve managed to talk yourself down a bit, the fun can really begin! This month is Chef David Burke’s Annual Wine Month, which means every table gets one of these: 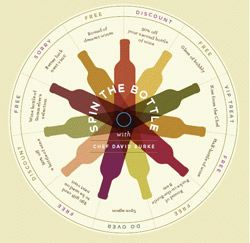 It’s like spin the bottle, except not at all. Just go with it. Spin the wheel. You’re in an alternate universe. Chef Burke really wants you to win 50% off a bottle of wine so you can order Coche Dury and a grilled cheese sandwich. Spin for a free half-bottle of wine and order the most expensive one. No problem. Win a “kiss from the chef”? Here comes a tray of signature David Burke chocolate kisses delivered to your table by someone in a white chef’s coat. Not David Burke? Don’t ask questions. Win a round of Burke-in-the-bottle beer? Get it while you can because Chef has a new line of wines coming out called Burkehouse by David Burke that are sure to steal the spotlight.

Don’t laugh, though. Truth is: you need the wheel. The wine list itself is hardly offensive, but it’s unbalanced and there isn’t much to play with under $100. It’s exactly the sort of list you’d expect at a place like Townhouse: long on Bordeaux and CA, with big name Burgundy right behind. But, the pricing is reasonable and the collection—though largely obvious—allows for several pleasant surprises. Still, if you’re actually here it pays to take the wheel for a spin. Why not? In a space that’s more Alice in Wonderland than Upper East Side, it’s easy to tell yourself that none of this is actually real.

A QUICK GUIDE TO THE WHEEL AT TOWNHOUSE:

Wine bottle of sommelier’s selection:
The sommelier insists that he’ll pick something decent. “Not a Margaux or anything, but maybe a nice Sauvignon Blanc.” Don’t be afraid make suggestions.

Kiss from the chef:
Request the executive chef or the pastry chef bring your signature David Burke chocolate kiss to the table. Apparently, they’re the two most handsome guys in the house.

Round of Burke-in-the-Bottle beer:
Ask for a substitution?