Share All sharing options for: Tracking the Big Restaurant Design Trends of Fall 2010

We’re only about halfway through the big fall restaurant season in New York, but a few design trends are already starting to emerge. Here are eight of the big ones: 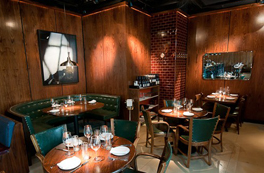 8) Rec Room Chic: Oddly enough, your dad's basement lair seems to be the inspiration for many of the season's big new dining rooms. Burger & Barrel, Lowcountry, Hill Country Chicken and Brats: Dogs & Wieners all have dining rooms that incorporate dark browns, wood paneling, low ceilings and retro vinyl/leather booths and chairs, sometimes with vintage ephemera tacked up on the wall. It's a masculine look that's loose and inviting, one that makes new restaurants feel like they've already been around for a while. [Photo] 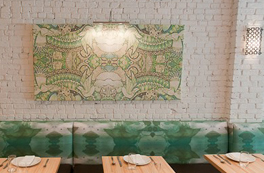 7) Floral Prints: Usually flower patterns, whether in the form of wallpaper or big prints, are too girly or too busy to work as the focus of a chic dining room or lounge. But three openings this fall have actually used them to great effect: the downstairs area at Julie Reiner’s Lani Kai is accented by a crisp bamboo pattern along one wall, Harold Dieterle’s Kin Shop rocks a pleasantly eye-grabbing large green print in the center of the dining room, and, oddly enough, Michael Huynh’s Baorrito even features a sharp, striped pink and purple flower motif incorporated into the floor-to-ceiling wood paneling. [Photo] 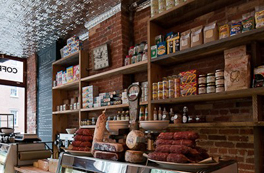 6) Grocery Shelves: The trend of restaurant/market combos is on the rise — Jeffrey’s is the big opening of the year in that category — but a handful of new concepts also feature elements of the old-fashioned grocery store aesthetic, even though they don't actually have a retail component. You can see some form of this at Osteria Mornini (shelves stacked with wine and jars throughout), Lowcountry (cupboards with bottles) and Burger & Barrel (open-faced cabinets and "specials" chalkboards above the room). [Photo] 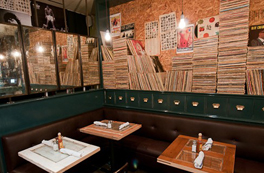 5) Records as Artwork: Two of the big Southern-food openings of the fall, Hill Country Chicken and Lowcountry both feature old vinyl as a part of their dining room designs. The former has LPs in frames on the wall, the latter has big stacks of records piled around the top of the main room's banquettes. We hear that LIC's Sweetleaf Coffee will also feature a record nook as a part of its redesign, when it opens its expanded cafe space this weekend. [Photo] 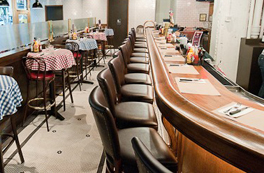 4) Dining Bars: At-the-bar dining is a huge part of New York City restaurant culture, and many of the big fall openings have either created bars designed for enjoying a big meal with your drink, or areas that replicate this experience, without the actual liquor component. Take, for example, Steve Hanson's two new joints, Bill’s Bar & Burger, and The Atlantic Grill, which both have long service counters in addition to tables and a proper cocktail area. The dining area at Jeffrey’s is made up of a tall counter and a large communal table with high stools, and Mehtaphor also offers a bar-style nook tucked away in one corner.[Photo] 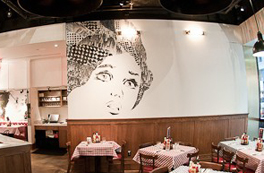 3) Black and White Prints: Many of the more eccentric, colorful spaces of the fall incorporate black and white prints to ground the busyness of the room. A wall-sized old-timey photo is in the main seating area at The Lamb’s Club, a large, abstracted photo print is splattered all over one side of the crazy Bill’s Bar & Burger space, and lines of framed black and white photos circle the rustic, vibrant room at Osteria Morini. [Photo] 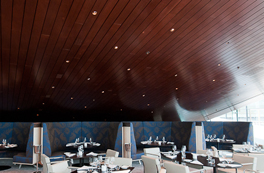 2) Lodge Ceilings: For whatever reason, wood paneled ceilings inset with circular fixtures have been popping up at a lot of the fall's debuts. Sometimes these are used in spaces like Lincoln, where the eye is draw to the ceiling’s unique slope, other times this detail compliments the cozy cabin feel of an interior like the one at Mehtaphor. This look can also be found in a less refined environment at Michael Huynh's newest Mexican-Asian concept, Baorrito. [Photo] 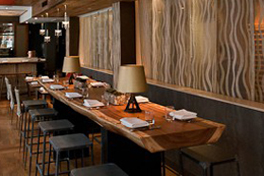 1) Low Communal Table/Stool Combos: Farm tables aren't going anywhere, but curiously, a number of restaurants have adopted long, unusually low communal tables with backless stools or benches. These can be seen at Mehtaphor, Lani Kai, and Fat Radish. They make the space look cleaner, taller and more open — even if nobody wants to sit at these tables, unless they absolutely have to. [Photo]