Share All sharing options for: A Bourbon At...Idle Hands Bar

Idle Hands Bar is a Rock and Bourbon themed bar located in a clandestine
basement in Alphabet City. While it claims to be a speakeasy, it’s not one of
those places, and that’s a good thing. Also, I don’t think many speakeasies
back in the day had signs outside advertising their happy hour specials. 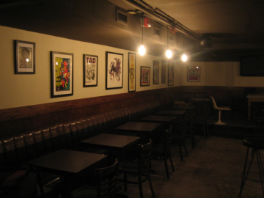 A Bourbon At?is sponsored by our friends at Basil Hayden’s Bourbon. Basil Hayden’s is handcrafted, light-bodied and aged longer with twice as much rye to produce an incredibly approachable, sophisticated and luxurious bourbon. It’s spicy. Unexpected. And full of potential. Just like your plans tonight.

Upon descending into the bar, I felt like I had walked into Paddy’s Pub from “It’s
Always Sunny in Philadelphia.” The bar was overly bright, had two uninterested
and self-involved bartenders and even a cute but surly waitress. There was no
Frank Reynolds but there was peculiar old man in the corner. I kept waiting for
him to say something funny or do something depraved but I left disappointed.

However, the disappointment ended there. As I took my seat, the lights dimmed,
the volume increased and the waitress kindly explained to me they'd only have
waitress service available until they can get a license upgrade to a full service
bar. With my first impression turned on its head, I turned my drink menu over to
reveal over 80 different types of bourbon, making it one of the most impressive
bourbon selections in the city. Not bad.

The classic rock blaring from the speakers at Idle Hands provides a great
soundtrack for a night of basement drinking and the lack of windows combined
with the unfinished concrete floors makes this place a serious contender for best
upscale dive bar in the East Village.

Thought your days of drinking with your friends in a windowless basement while
listening to classic rock ended in college? Guess again.