Peels Opens With Preemie Wine List and Digs Into Domestics

Welcome to Eater's column, Decanted, in which WineChap's Talia Baiocchi guides us through the treacherous world of New York wine lists. Today: Peels. 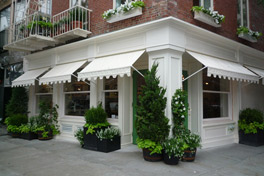 Peels has finally unveiled its wine list, and well, it’s a bit of a preemie. The list, brought to you by Freemans' co-owner William Tigertt, ditches the Euro-centric approach he honed at the sister restaurant in favor of a short list of primarily domestic wines. The list currently sits around 55 selections—Tigertt plans to expand to about 150 in 2011—and although it’s not fully developed, it provides a solid introduction to his plan.

He’ll rely on affordable domestics, a challenge to be sure, but for a restaurant like Peels—downtown and hip, with a legitimate wine lover behind the list—it’s a great opportunity to set the bar a bit higher. On the one hand, the increasing number of small California, Washington, and Oregon producers—some taking up residence in far-flung terroirs—are practically begging for someone to put together a progressive list of American wines. On the other, plenty of boring booby-traps still lurk in the lower price points, and Peels, despite a subtle embrace of the former, is still at times tangled up in the latter. It’s hard to say exactly where it will go, but here’s hoping for a big bear hug for those producers making terroir-specific wines with restraint, producers such as Corison, Mayacamas, Mount Eden, Renaissance, St. Innocent, and Copain, etc. Or perhaps a solid nod to California’s new periphery with some goodies from Donkey and Goat, Wind Gap, Arnot-Roberts, and Vare, just to name a few. Some of these can be difficult to acquire, but our hopes are high that Tigertt can really twist some arms and give us something to really get excited about.

For now though, the list at Peels does feel incomplete. The wines are priced very fairly, and there is definitely some value to be had, (in fact, there are a few skinny markups on wines worth visiting for, most of them, however, are European) but it gets a bit predictable and lacks imagination in some places. However, the list still has a great chance of growing into a healthy, cool-looking baby with him at the helm.

Bang For Your Buck
Chardonnay Sonoma Coast 2009, Lioco $40
The new darling of the un-oaked Chardonnay craze, Lioco makes mineral-driven, delish Chard. However, as prices continually rise with demand for this guy, it’s pushing $60 on most lists around town. Peels keeps it within reach with a charitable mark-up.

Pinot Blanc 2009, Robert Sinskey $98 (1.5L)
Impossibly likable Pinot Blanc from one of CA’s great proponents of biodynamic and organic farming. In a cool looking Alsatian-style magnum this is an excellent, versatile choice for a group that will play nice with most of the menu.

Syrah ‘Cuvee Fairbain’ 2009, Edmunds St. John $52
Steve Edmunds is certainly part of CA’s aforementioned “new periphery” even though he’s been around for some time. Edmunds is a lover of the old world in a sea of modernists and his wines exhibit restraint and elegance. Great go-to stuff in this price point and Syrah is his definitely his jam.

Pinot Noir ‘Savoya’ 2008, Ken Wright $60
One of the biggest, if not the biggest name in Oregon pinot, Ken Wright’s wines fetch top coin and are notoriously ageworthy. Again, a real gift in terms of pricing here and an excellent opportunity as a result. Needs a swim in the decanter.

Off The Beaten Path
Brut Rosé 2005, Soter $75
Tony Soter is no slack when it comes to Pinot Noir, but he’s gained a real cult following with his Sparkling wines, which are easily among the best being produced in the states. The Brut Rosé is a blend of equal parts Chardonnay and Pinot Noir and is aged for an extended period on the lees. Another great deal, price-wise.

Crowd Pleaser
Fumé Blanc 2008, Grgich Hills $60
Historic winery out in CA that is now practicing organic and biodynamic. The estate owns over 350 acres and the production is far from small, but the wines are always consistent and do show quite a bit of restraint. Fumé Blanc (a.k.a. Sauvignon Blanc) is one of the varietals the estate does very well, albeit in big quantities. Aromatic and food-friendly; one of the better Sauv Blancs in the valley.

Under $40
Two wines under $40 that are really not terribly exciting. If you’re on a budget go for Evening Land Vineyards’ ‘Celebration’ Gamay at $40 for red or Edmunds St. John’s Roussanne at $45 for white.

Break The Bank
Blanc de Blancs Brut ‘Fleuron’ 2004, Gimonnet $198 (1.5L)
Refined bubbly from one of the more well-known small growers. Great wine to ride through the meal with a big group.

Nuits Saint Georges 1er Cru ‘Clos de L’Arlot’ 2005, L’Arlot $120
I’ve spoken many a praise for L’Arlot and although this wine is still a baby, the pricing is right and it should show enough leg with some time in the decanter to warrant the early kill.

Beaujolais ‘Côte du Py’ 2008, Foillard $134 (1.5L)
Again young for this wine, but you rarely find it with any age behind it. Foillard is the master when it comes to Morgon and this bottling is often the single greatest argument for the brilliance of Gamay in Beaujolais. Get a group of four together and call ahead for a decant.

WTF?
Cabernet Sauvignon ‘Hyde Vineyard’ 2007, Paul Hobbs $280
There are just so many other Cabs (less expensive Cabs) that warrant a spot on this list ahead of the Hobbs Hyde. Not worth the coin when you can drink twice the Foillard for half the price.