Share All sharing options for: Dentons to Extend 'inoteca Empire to Tribeca, Williamsburg

Throughout the New York City Food & Wine Festival this past weekend, Eater welcomed bloggers, journalists and food world stars to our lounge at the Standard Hotel. So many people came that we couldn't fit all the interviews into our weekend coverage. So here, now, one of our Sunday visitors, 'inoteca's Jason Denton. 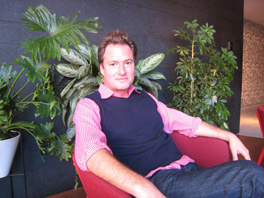 What's new at the 'inoteca empire? We're working on two new locations to open in the next six months. Tribeca will open in the next two to three months. I can't tell you exactly where, because we won't have the lease in hand until next week. It'll be our first step out of Italian, small plates but a move towards French and a more Meditteranean feel. We want to find a young chef who's impressionable and make it simple and direct. It's a great little location, under 65 seats, in a fun part of Tribeca. One of our partners lives in the area, so after being in the West Village for so long we were looking looking in Tribeca and finally found it.

And the second new location? And then there's Williamburg. We'll open there in five or six months. My brother moved there five months ago, and loves it. So I've been out there a lot. I love the energy. It reminds me of when we opened the 'inoteca on the Lower East Side ten years ago. It has the same raw feel.

Which part of Williamsburg? North, I guess, in the Bedford and Berry area. It'll be the same sort of style, roughly 60 seats. We'll have a full kitchen there, but we'll still focus on small plates. And unlike the quartinos we offer at Corsino, we'll go back to the by glass offerings. It will be Italian spirited, and we'll use as many local ingredients as we can great. Pricepoint? It will have a similar price point to our other restaurants, but more in line with 'inoteca than the more expensive Corsino.

Sounds a little overwhelming to open both at the same time. We have quite a few partners who are great at what they do. And they have equity so they have real understanding and responsibility. A lot of people have been with us for awhile so it's good to expand the philosophy of what we do.

How do you know when you're opening too many restaurants? Is there a point where one group should slow down? It has a lot to do with the bench you have, the team you have assembled. When it's light, you pull in and wait. Other than Corsino and 'inoteca in Murray Hill we haven't opened anything in quite awhile. And I have all these people with me and partners, and in order to maintain the spirit and vibe you need to let them take the next step. Otherwise they'll leave you for someone else. When you have so many eager and hungry people, you have to let them grow. If they are stagnant, you'll be stagnant. I'm also slightly ADD, so I need movement.

Would you ever open uptown? Totally. I don't look at things as certain parts of town. I just go with what's natural at the moment. We've looked at tons of spaces uptown and nothing's grabbed me. I'm sure there are some amazing spaces up there but I haven't found the time to find them.

What else is happening at the restaurants? We just introduced regional tasting menus a couple of months ago. We did Sicily and this month we're in Tuscany. It gives the chefs an opportunity to get creative and focus on the different flavor profiles that come with each region, and it allows the the wine director to pick wines that they're really fond of.
· All NYCWFF Coverage [~ENY~]