Share All sharing options for: Sisha Ortuzar and Jeffrey Zurofsky on Riverpark and 'wichcraft

Throughout the New York City Food & Wine Festival this past weekend, Eater welcomed bloggers, journalists and food world stars to our lounge at the Standard Hotel. So many people came that we couldn't fit all the interviews into our weekend coverage. So here, now, two of our Sunday visitors, 'wichraft and Riverpark men Sisha Ortuzar and Jeffrey Zurofsky. 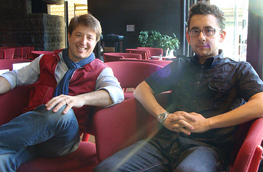 So how's the new restaurant? Sisha Ortuzar: It’s going really well, we’ve been fortunate to be really busy. It’s a great thing to have after all your hard work and thinking about it. Jeffrey Zurofsky: The area is great — we’re surrounded by gorgeous buildings and a public plaza, and the way that the space is built you see the river, Long Island City, the Pepsi Cola sign and the UN Building.

Did you have any concerns about the space being too out-of-the-way? JZ: When you’re dropped off in a cab you expect to hear crickets, but then you walk a little bit and then you‘re in this nice cobblestone area, and the restaurant's totally tucked away, but it has a lively feel. That neighborhood is totally underserved. SO: It’s one of those places that feels like it’s in a different city. But the space is fantastic. We’re actually in the process of designing and planning a farm in the city. JZ: There’s enough land to do something there, to grow our own produce for the restaurant group.

How did the restaurant come together? SO: Over the last seven years, Jeffrey and I have kind of concentrated on the development of the group of restaurants. I haven’t spent a lot of time in the kitchen, per se, so this marks a return to the kitchen for me. I feel like there’s a lot of people, a lot of chefs in general, who cook a certain kind of food, but they’re always talking about some other kind of food that they want to eat. As far as the menu, I thought about the food that we wanted to cook and that we wanted to eat. We are one of the only restaurants in the area and we need to be able to serve a variety of needs, so we have two menus and you have a few different services of food — there’s no rules in terms of where you are sitting. The dinner menu is a little more structured, and with the café menu you put your meal together however you want. We have a great lasagna and burgers and stuff like that. JZ: My favorite dish is the octopus roll, it’s exactly what you want to eat. SO: It’s like a hot dog, but with octopus. We’re using the ingredients that you want to see in dishes that you want to eat — there’s more fried food too and a lot of pastas.

What was Tom Colicchio’s involvement? SO: The menu is mine, his first role on this was as a restaurateur, and helping with the general concept and working in the same way that he does with everything that we do. I’ve been working with Tom for about fourteen years now. JZ: It’s interesting because we’ve been fortunate to have Tom’s seal of approval every step of the way. One of the things that happened at ‘wichcraft was that we were playing with the different menus at the different locations, and you don’t want to upset people that are loyal and come to the restaurant for certain dishes. So this was an opportunity to play around with some of the ideas that we were playing around with at 'wichcraft for dinner and the Southwest Porch, and expand on those. SO: We have a great team, so it’s good to do different projects for them and it’s good for us.

How many ‘wichcrafts are there now? JZ: We’ve got 18 across the country. We’ve got one in SF, one in Vegas, and we just opened our 16th in New York. We make everything fresh in our commissary every day — it’s amazing what these guys put out. We’ll open more, but it’s challenging what they do, and it’s definitely a challenge to put out a consistently good product the more you grow. We don’t want to become Starbucks. We don’t want to make bad choices. It’s better to build good ones than a bunch of mediocre ones. Riverpark has actually reinvigorated the ‘wichcraft projects a lot.

Where are you eating now when you're not at Riverpark? SO: I’m almost living at the restaurant. JZ: I’ve been pretty much eating breakfast and lunch at the restaurant. Last night I had an opportunity to go to Mehtaphor, he’s a great chef. My wife loves Angelica Kitchen, so we go there a lot.