Share All sharing options for: The Franks Talk Michelin, Matsugen, Their Delicat-Essen

Throughout the New York City Food & Wine Festival this weekend, Eater welcomes bloggers, journalists and food world stars to our lounge at the Standard Hotel. As the peeps pass through, we're going to chat them up and spit out the dialogue here in this business, From the Eater Lounge. Right now: Frankies Spuntino's Frank Falcinelli and Frank Castronovo. 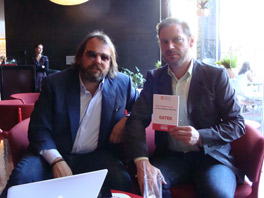 What was your reaction to this year’s Michelin Guide? Frank Falcinelli: We’re really excited, we got a Bib in each joint. Frank Castronovo: We’re just trying to do what we do, we’d love a star. FF: We’ll get it. The New York Times has been reviewing restaurants for a hundred years ? Have you seen how many countries Michelin covers? FC: It’s amazing how many countries they got, it was how I got around when I was in Europe. It’s amazing — you can find hotels, restaurants, there’s nothing better than that. FF: It’s a particular type of reviewing, also. It’s like Jason Bourne. Totally anonymous. FC: I agree that Michelin has a standard that’s different form everyone else’s. They serve different purposes. How they started was in France, they started with French culture, French food, French hospitality. And when they expanded, you could see they were using that criteria, and you could feel that they were coming from a French style. And they're adapting.

Tell us a little bit about the Prime Meats store. FC: Delicatessen — do you know what that word means? It’s two German words put together, it means fine food. Over the years it became one word. We serve everything that we use at the restaurants, both Frankies and Prime Meats. We sell the meats and also prepared products as well. It’s a great place for prepared foods, if you want to order a hamburger, a meatball sandwich, everything that we wrote about in our book, the breads that we’re starting to do now. Roman-style pizzas too. The cavatelli? FC: Yeah, yeah, the cavatelli, the ravioli, the gnocci. Braciole also, two by two. FF: Sometimes you just want to smoke a joint and eat but not in a restaurant, and you don’t want delivery.FC It’s a great spot, you got butter, cheese, eggs, bacon. It’s great, it’s simple.

What’s the status on the Portland restaurant? FC: Portland’s on the back burner, we’re doing the West Village right now.

Did the Times review bring a lot of people to the restaurant from outside the neighborhood? FF: The Times helps, but yeah, it all helps. Last summer nobody went on vacation, but this year, people went on vacation. What it does is it sends out a wave that says, "go and check this out." If Sam Sifton says it’s three stars you are going to check it out if you live in New York. But I’m talking about internationally — Frommers, Figaro, they check it out and they write about it, and then it’s second wave. That second wave business is essential.