Throughout the New York City Food & Wine Festival this weekend, Eater welcomes bloggers, journalists and food world stars to our lounge at the Standard Hotel. As the peeps pass through, we're going to chat them up and spit out the dialogue here in this business, From the Eater Lounge. Right now: Scarpetta and Faustina's Scott Conant. 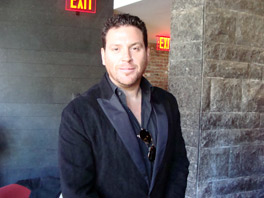 Scott Conant, looking trim. I actually just lost 15 pounds. I did one of those New York Diets for Grub Street and realized all of the bad food I was eating. I was with a friend of mine we went to Del Posto, and we went to Eleven Madison Park, and after I went to a nutritionist. She told me I ate like shit. In a matter of days I lost 15 pounds. Wowza. It’s a lot of greens and a lot of vegetables. It gave me a real inspiration. Soon after I started to implement the vegetarian menus at all of my restaurants.

So what is going on with the Faustina space? We’re evolving, there’s a lot of room with that space, we did it with such a quick turnaround time. It resonated with some, it hasn’t really resonated with others, but people want to eat the food that they really like, and I think we’re doing that well. But for the moment we’re opening up in LA.

How is Scarpetta LA going to be different from the restaurant in NYC? We’re not doing as many of those classic Italian dishes that we do in New York, we’re doing something a little bit more farm-oriented, utilizing some of the great produce that they have out there. And the kitchen is going to have this great chef's table in a glass-walled room inside the kitchen, and there’s also six seats at the chef's counter in addition to the chef's room. The hotel the restaurant is in, the Montage, was built with the customers experience in mind, they spent a lot of money and a lot of time to create that, it’s very impressive.

How are things at Scarpetta Toronto? Toronto’s going great. And despite people not liking me, they like the restaurant a lot. And how are the Vegas plans coming along? I’m opening in December. Two places for December: LA and Vegas.

Do you ever worry about quality control with opening up so many restaurants? I think people are worried about it, but the most important thing is providing a product with a certain value, and it has to be customer-oriented. The environment has to be something that resonates with people, the food has to be solid, and the service has to be great. The infrastructure that I have is built from NYC, and when we add new people to the game, we allow them time to absorb what we do, but also kind of learn from them. I say no to a lot more deals than I say yes to, and normally when I say yes to something it’s because there’s something too good to pass up. I have a lot of executives right now, I've got partners and a director of culinary development. I’m working with an assistant DP, legal, accounting — it’s all very important. That being said, there’s a lot of room for growth. But we've done seven restaurants at the end of the year, that’s a lot of restaurants.

I'm sure you've heard restaurateur Drew Nieporent's complaint that Michael White is poaching all the talent in New York [Smiles in a way that says there is no way in hell he is touching this one.] It’s interesting. It’s a logistic balance. You’re dealing with two people with very strong personalities, they are clearly very good at what they do.

When you open a new restaurant do you take people that already work for you to start the new places? What I do is I try and train them at the other restaurants. We hire three months out because the most important thing isn’t just the execution of the food, it’s the philosophy behind it. There’s a reason why we do what we do, there’s a sequence to service, and to the opening, getting everybody on board — I think it’s really important.

What's going on with the TV stuff? We’re starting to film the new season of 24 Hour Restaurant Battle, and I just finished a bunch of shows at Chopped.

Where are you eating? I’m spending a lot of time in LA. I had dinner at Cecconi's in LA, I had this porchetta — they somehow managed to have this giant porchetta that was so juicy. The skin, in particular, was perfectly crisp.
· All NYCWFF 2010 Coverage [~ENY~]